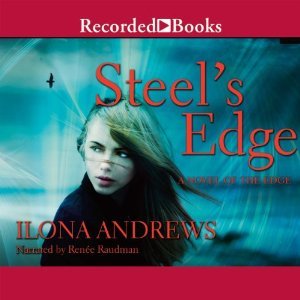 The Edge lies between worlds, on the border between the Broken, where people shop at Wal-Mart and magic is a fairy tale—and the Weird, where blueblood aristocrats rule, changelings roam, and the strength of your magic can change your destiny…

Charlotte de Ney is as noble as they come, a blueblood straight out of the Weird. But even though she possesses rare magical healing abilities, her life has brought her nothing but pain. After her marriage crumbles, she flees to the Edge to build a new home for herself. Until Richard Mar is brought to her for treatment, and Charlotte’s life is turned upside down once again.

Richard is a swordsman without peer, future head of his large and rambunctious Edger clan—and he’s on a clandestine quest to wipe out slavers trafficking humans in the Weird. So when his presence leads his very dangerous enemies to Charlotte, she vows to help Richard destroy them. The slavers’ operation, however, goes deeper than Richard knows, and even working together, Charlotte and Richard may not survive...

It should come as no surprise that I’ve been enjoying this series a lot, but I haven’t LOVED any of the installments yet, until now. When I first discovered that this final book featured a healer as the main heroine, I had some qualms as to whether Charlotte would be able to achieve the level of badass-ery that I’ve come to expect from Ilona Andrews. Case in point, FATE’S EDGE’s Audrey Callahan wasn’t a fighter either, and ended up being my least favourite THE EDGE female protagonist. All of my doubts quickly flew the coop though when I learned that de Ney’s abilities could also be used to harm, and I’m not talking little ouchies here, but mass murdering plagues. Never have I been so happy to eat my words! The world-building, narration, secondary characters, and storytelling absolutely rocked too. This was the series finale after all, and this author duo doesn’t do half-assed. Period.

I liked that the protagonists were older; they’ve both been married once already, are individuals first, and a couple second. Charlotte and Richard have been around the block a couple of times, and as a result, were unwilling to settle for anything less than true love. It made them both more accepting of their respective faults; the flash fire romance was believable on account of them knowing exactly what they wanted in a partner, and not being afraid to go after it. I loved de Ney’s flawless poise vs. Mar’s backwoods mannerisms, and her raw power to his skill with a blade. She fears transforming into a bringer of plagues, while as he’s worried that he’s not Blue Blood enough for her. When they finally opened up their hearts to a relationship, it was like two puzzle pieces sliding home.

The Andrews’ skillfully wrapped-up this series’ story arc while still weaving a captivating story about slavers, political intrigue, and also tying up several loose ends secondary character wise. Jack and George play a vital role in this installment, and I loved how they were able to get some closure with regards to their father’s abandonment. Sophie gets a piece of Spider for fusing her mother, and even Rose, Declan & Kaldar had brief cameos. As much as I enjoyed the action, I actually liked Charlotte’s poised manipulations and tutelage of Lark more. It takes finesse to defeat a foe with a sword, but even more so with words, and clever artifice. However, not everyone got their HEA unfortunately, poor sweet Éléonore… And, was it just me, or were there sparks between George and Sophie? Potential spin-off?

I’ve now had the pleasure of listening to eleven audiobooks from Ilona Andrews and Renée Raudman, and let me tell you, the experience is in no danger of getting old. There are many reasons why this trio makes up the bulk of my Audible library including spellbinding performances, flawless pacing, and masterful tone. Raudman is the voice behind the Andrews’ written word, breathes life into all of their memorable characters, and makes listeners feel like they inhabit this author duo’s fictional worlds. If you’re still on the fence about audiobooks, I highly recommend that you give these a try, you won’t regret it! In fact, your house may end up cleaner than it has even been because you’ll find yourself actively seeking out excuses to read hands-fee.

STEEL’S EDGE was the ultimate epitome of go big or go home! My god, am I ever going to miss these characters!