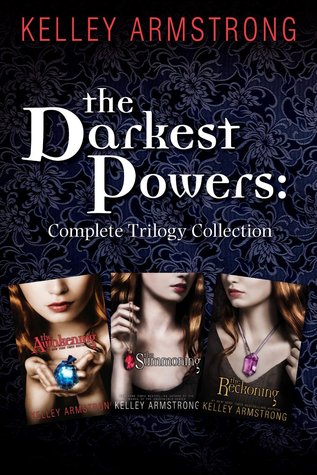 The Summoning: Chloe is locked up in Lyle House, a "special home" for troubled teens. Yet the home isn't what it seems. There is definitely more to Chloe's housemates than meets the eye. The question is, whose side are they on? It's up to her to figure out the dangerous secrets behind Lyle House . . . before its skeletons come back to haunt her.

The Awakening: Chloe Saunders is a living science experiment--not only can she see ghosts, but she was genetically altered by a sinister organization called the Edison Group. She's a teenage necromancer whose powers are out of control, which means she can raise the dead without even trying. Now Chloe's running for her life with three of her supernatural friends--a charming sorcerer, a cynical werewolf, and a disgruntled witch--and they have to find someone who can help them before the Edison Group catches them.

The Reckoning: Chloe Saunders's life is not what you would call normal. First of all, she can't figure out how she feels about a certain antisocial werewolf or his charming brother--who just happens to be a sorcerer. Then there's the fact that she's running for her life from an evil corporation that's trying to kill her and her supernatural friends. And finally, she's a genetically altered necromancer who can raise the dead, rotting corpses and all, without even trying. But Chloe has a plan. And the end is very near.

Kelley Armstrong is #1 on my list of favourite authors thanks to her phenomenal WOMEN OF THE OTHERWORLD series, so I thought it was high time that I gave her Young Adult trilogy a chance. Like most first installments, this audiobook has its share of flaws, but still managed to do a decent job of introducing the characters, and the DARKEST POWERS universe. The paranormal elements were subtle in the earlier chapters which was kind of disappointing, and the author immediately painted all of Chloe’s parental figures in a distasteful light which is a personal pet peeve of mine where this genre is concerned. I did like how Saunders conquered her fears by putting everything into the context of a movie, it was very teenage overactive imagination, and I’m confident that Derek and I will get along just fine. There was of course a cliff hanger which twisted my arm into binge listening to all three.

Book 1 focused more on world-building while as this one was all about the action; the kids are still on the run from the Edison Group, Souza had his first encounter with werewolves and it did NOT go well, and living on the streets comes with its own set of challenges as well. I’ve enjoyed watching Chloe and Derek’s relationship progress throughout this trilogy, they get lots of alone time in this installment, and their dialogue is definitely one of the highlights of this story. Unfortunately this novel was somewhat bogged down by Tori’s annoying POV, and the characters’ run-in with the wolves gave me some pause because it took place near Syracuse, NY which is close to the North American Pack’s home base, and none of the WOTO weres would have dealt with a youngin the way Derek was treated in THE AWAKENING. Mutts? Anyway, another quick and satisfying listen from Armstrong.

Chloe and co. received some much needed coaching from Andrew’s team, however that quickly backfired when the adults realized that their charges trump them by leaps and bounds in the power department. I really hated Margaret, her insolence and insistence on pushing Saunders to crank up the juice resulted in a brilliant oh-shit moment that served as her just deserts. The author tied up the bulk of this series’ lose ends with finesse, and I knew from the get-go that DARKEST POWERS was set in the WOTO universe, but in this installment that was finally confirmed with references to the various cabals, and how the story was linked to Savannah & Adam’s short in Kelley Armstrong’s OTHERWORLD NIGHTS anthology. I very much liked how the romance concluded, and some interesting new characters were introduced towards the end that have left me scrambling to place them—the DARKNESS RISING trilogy perhaps?

Cassandra Morris’ narration was appropriate for these audiobooks, her voice fit that of the fifteen year old MC’s, and she incorporated Chloe’s speech impediment into the dialogue admirably. However, as the story progressed and the heroine evolved, the child-like tone would have benefited from a slight adjustment. I had zero issues with listening to these installments one after the other because the performance was homogeneous, and the character voices didn’t deviate. The pacing did Armstrong’s writing style proud, and the built-in creep factor that comes with seeing ghosts was always present. I wouldn’t hesitate to purchase another Young Adult title that featured Morris as the narrator.


Was this review helpful? If so, please consider voting for it on Amazon or like it on GoodReads!