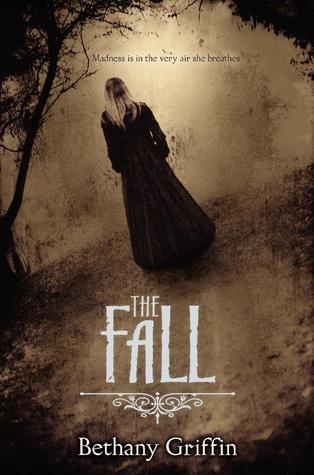 She has spent her life fighting fate, and she thought she was succeeding. Until she woke up in a coffin.

Ushers die young. Ushers are cursed. Ushers can never leave their house, a house that haunts and is haunted, a house that almost seems to have a mind of its own. Madeline’s life—revealed through short bursts of memory—has hinged around her desperate plan to escape, to save herself and her brother. Her only chance lies in destroying the house.

In the end, can Madeline keep her own sanity and bring the house down?The Fall is a literary psychological thriller, reimagining Edgar Allan Poe’s classic The Fall of the House of Usher.

When I was in college, I CLEP-ed out of Survey of American Literature. I did this b/c I HATE American Lit. I hate Henry James, Nathaniel Hawthorne, Herman Meville, Hemingway, Faulkner, I hate them ALL.

As much as I hate the others, I love Poe.

I love Poe so much that for the first time ever, I felt like I had a legitimate reason for picking one football team over the other in the Superbowl a couple of years ago . . . the Baltimore RAVENS (b/c Poe lived in Baltimore).

While Poe’s The Fall of the House of Usher isn’t my favorite of his short stories, I’m familiar with it, and I appreciate it. And more importantly it’s the kind of horror I can get down with, the more cerebral kind of horror. It’s written from the POV of Roderick Usher’s boyhood friend, who has come to visit at Usher’s request. The setting is exceedingly ominous, and someone is inevitably buried alive.

So when I saw The Fall by Bethany Griffin, it was a no-brainer—how cool would it be to use Poe’s original story as the foundation of an entire novel, told from to POV of Roderick’s sister? SO cool.

Unfortunately, it didn’t quite live up to my expectations.

I rarely read horror (b/c chicken). That being said, when I do read horror, especially when it’s October, Autumn (my favorite season) is creeping in, and Halloween is looming in the distance, I want to be, at the very least, seriously creeped out.

The creepiest part of this book was the expectation of a taboo brother/sister relationship, which is, yes, seriously creepy, but it was not the kind of creepy I was looking for.

I wanted sinister, I wanted malevolent, I wanted foreboding . . . and I didn’t get it.

But that wasn’t the only problem.

Roderick and Madeleine Usher are twins. They are the only children in their household, so it’s no surprise that they are very close. Even as children, there were hints of something more between them (ICK), but they are separated when, in their mother’s attempt to stave off the family illness from her favored offspring, Roderick is sent away to school, leaving Madeleine alone.

Except for the house that has chosen her as its heir.

But while the idea itself had a definite creep factor, the overall feel of the book, the setting, many of the evidences of the sentience of the house . . . did not. Which is surprising, b/c given the scenario, it should have been like shooting fish in a barrel.

And that’s not the worst of it.

When Roderick goes away to school, Madeleine decides to start a garden. We’re told that both the house and the surrounding area are cursed, and specifically that the curse causes every growing thing on the grounds to become diseased and/or rot, yet Madeleine is inexplicably able to grow healthy ivy. AND not just any ivy, ivy that can ultimately counter the evil of the house.

And sure, I suppose that in a world where a house and family can become cursed, there can be other types of magic as well, but where this alien ivy magic comes from is never revealed.

There is also no explanation for the survival and reappearance of a certain proper noun (sorry, can’t tell), presumed dead, after sacrificing itself to save Madeleine from the friendly neighborhood KRAKEN (or monster octopus/squid/whatever—it’s unclear, so I went with KRAKEN) that lives in the noxious waters of the House’s tarn (a small mountain lake).

Then there was the open ending. *sighs*

But despite all those things, it wasn’t all bad. Dr. Winston was a superbly diabolical character, and many of the other characters and situations that were merely hinted at in the original were fleshed-out beautifully in The Fall. I’d recommend this anyone who thinks they might like horror-lite, or who doesn’t get hung up on things like understanding why and/or how the villain is defeated.

40 responses to “Review: The Fall by Bethany Griffin”