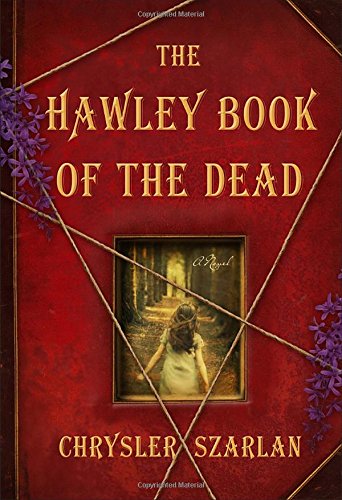 For fans of The Physick Book of Deliverance Dane and A Discovery of Witches comes a brilliantly imagined debut novel brimming with rich history, suspense, and magic.

Revelation “Reve” Dyer grew up with her grandmother’s family stories, stretching back centuries to Reve’s ancestors, who founded the town of Hawley Five Corners, Massachusetts. Their history is steeped in secrets, for few outsiders know that an ancient magic runs in the Dyer women’s blood, and that Reve is a magician whose powers are all too real.

Reve and her husband are world-famous Las Vegas illusionists. They have three lovely young daughters, a beautiful home, and what seems like a charmed life. But Reve’s world is shattered when an intruder alters her trick pistol and she accidentally shoots and kills her beloved husband onstage.

Fearing for her daughters’ lives, Reve flees with them to the place she has always felt safest—an antiquated farmhouse in the forest of Hawley Five Corners, where the magic of her ancestors reigns, and her oldest friend—and first love—is the town’s chief of police. Here, in the forest, with its undeniable air of enchantment, Reve hopes she and her girls will be protected.

Delving into the past for answers, Reve is drawn deeper into her family’s legends. What she discovers is The Hawley Book of the Dead, an ancient leather-bound journal holding mysterious mythic power. As she pieces together the truth behind the book, Reve will have to shield herself and her daughters against an uncertain, increasingly dangerous fate. For soon it becomes clear that the stranger who upended Reve’s life in Las Vegas has followed her to Hawley—and that she has something he desperately wants.

Brimming with rich history, suspense, and magic, The Hawley Book of the Dead is a brilliantly imagined debut novel from a riveting new voice.

This book has the most original premise I’ve come across in a long time. If you don’t listen to anything else I say, listen to this—don’t read the blurb (except for the bolded part, that part’s fine). Learning that Reve Dyer shot her husband, whom she loved, without any context, is the way to go. TRUST ME. It doesn’t take long for it to unfold (I’m talking the first 5ish%), and this is one time my callous disregard for book synopses paid off.

Revelation Dyer is the last in a long line of Revelations. The first immigrated from Ireland to New England 250(ish) years ago, but this is not another Salem witches retelling. The Dyer women are not pagan practitioners, they are merely women with a variety of gifts. Reve’s Nan has an affinity for wild animals, her mother has a talent for healing. A Revelation who could read minds was a spy during the Revolutionary War, and Reve, herself, can vanish into thin air.

Given the nature of her family’s giftedness, it’s no surprise that Reve was raised on the stories of these remarkable women, disguised as folktales and legends of . . . horror.

The Fetch was the monster of Reve’s childhood. It was the story she begged her Nan to tell her over and over again, despite the fear it inspired. I could almost feel it’s singsong quality, almost see little girls with long hair in white dresses as they spun in a circle or jumped rope to a child’s version of the tale. A nursery rhyme meant to minimize the terror. A rhyme about the Fetch, come to steal you in night, and take you back to his master in fairyland.

But The Hawley Book of the Dead was more Modern Gothic than Horror—imagine an abandoned village in the middle of a protected forest in Massachusetts.

An abandoned village. In the middle of a forest. In Massachusetts.

That’s where Reve runs with her daughters after the death of her husband, and that’s where Reve learns there’s more to her gift . . . where does she go when she disappears?

Disappearing isn’t exactly the word for it. It’s as if I walk through a curtain, enter the passageway to another world. I sometimes feel that I could go further in, but I never do.

So the story/idea is obviously the high point for me. Unfortunately, I’m not a huge fan of thrillers or suspense novels (again, b/c I don’t do scary), so the middle lagged a bit. It could be argued that this entire book is a thriller, but there was enough lore, enough supernatural goings-on in the earlier parts of the book to keep me distracted. The middle  is almost pure mystery. There are still bits and pieces of the paranormal, but a magical book that reveals the mind of a psychopath in real time is basically just a brief POV change. And Reve’s desperation, while completely understandable, temporarily makes her not much more than a shrieking harpy, lashing out at everyone around her. I was also disappointed that Nathan wasn’t more developed. Szarlan laid the foundation for an absolutely spectacular secondary character, and never followed through.

Those few things aside, I thought this an excellent read, and I realize that I’m a minority as far as my dislike of thrillers is concerned, so it’s highly likely you won’t have the same issue I did. There’s also still hope for Nathan b/c this is the first book in what appears to be a quartet. *crosses fingers*

The Hawley Book of the Dead by Chrysler Szarlan combines stage magic with real magic, performance art with real life, and fantasy with suspense. In short, it was enthralling. I’d recommend this book to lovers of Urban Fantasy-lite and a good mystery. Get in on the ground floor of this exciting new series, people—I don’t want to hear your excuses of too many books in a few years. You know you are . . . *winks*

76 responses to “Review: The Hawley Book of the Dead by Chrysler Szarlan”