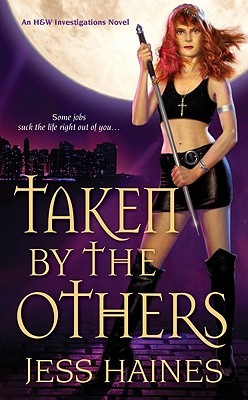 Once, New York P.I. Shiarra Waynest's most pressing problem was keeping her agency afloat. Now she's dealing with two dangerous, seductive vampires who have been enemies for centuries. The only thing Max Carlyle and Alec Royce agree on is that they both want Shia--for very different reasons.

Max is determined to destroy Shia for killing his progeny, while Royce's interest is a lot more personal. That's not sitting well with Shia's werewolf boyfriend, Chaz. As the feud between Max and Royce gets ever more deadly, a powerful vampire-hunting faction is urging Shia to join their side. Shia has always believed vamps were the bad guys, but she's discovering unexpected shades of grey that are about to redefine her friends, her loyalties--and even her desires. . .

TAKEN BY THE OTHERS proves that even ancient vampires aren’t above acting stupid over a woman. And, not only that, but these two elders are too self-involved to realize that the heroine doesn’t actually want either of them, because she’s already dating a hunky werewolf named Chaz. MEN! Granted, their motivations are slightly different, however at the end of the day it all comes down to jealousy. Six months have gone by since the previous installment, and Waynest was still under the misguided impression that she could walk away from the Others’ universe, well this book certainly cleared that up, and then some! I love me a good super villain, and we get that in spades with Max Carlyle—epic battles, betrayals, and sacrifices ensued as a result. That first kill is always the toughest, but consider Shiarra officially initiated into the elite club of vampire hunters. BOOYAH!

Becoming a kickass protagonist is never easy, and Waynest was most certainly put through her paces in this latest novel. She gets kidnapped on several occasions, experiences her first (and second) fanged kisses, and beats one of her assailants to a pulp. She also gets bound to not one, but two vamps, and overcomes the symptoms of blood withdrawal in all of their glory. However, when the dust finally settled, she was still standing, and in Urban Fantasy that’s the only thing that counts. I have enjoyed following Shia’s journey from human P.I. to don’t-mess-with-me slayer; I liked how Haines explained her insta-skills in HUNTED BY THE OTHERS, and then made her hit rock bottom in book 2. So many authors brush over the harsh learning curve that comes with their lead character’s heroine status, but not Jess, she let readers witness Waynest’s transformation in all of its gruesome magnificence.

The plot’s rather self-explanatory, just read the blurb and you’ll pretty much get the gist of it. I thought that the story tied in well with the previous novel while also adding to the H&W INVESTIGATIONS world nicely, and ensuring that this series will continue to gain speed in future installments. Another supe gets added to Haines’ already teeming paranormal cocktail in the form of Dawn, the elf supermodel, and the White Hats show their true colours. I can’t say that I was overly shocked by the latter, but at least Devon and Tiny demonstrated that not all members of their order are bigots. I also enjoyed learning more about this universe’s vampires including more details about the Others’ contracts, blood bonds, and their internal politics. The final powwow was an action lover’s wet dream, and meeting Mouse was a real delight—I hope that this won’t be the last we see of her.

I’m not completely sold on the direction of this series’ romance; I like Chaz, but I just don’t know. He gets mad props for sticking with Shia throughout her recent ordeals, and bonus points for staying the course without a contract, because no paperwork = no sex. They’ve officially been on-again for six+ months now, and surviving that long without knocking boots is a huge challenge for your average Joe, but for a werewolf it’s nigh impossible IMO. It’s either true love, or the man is a complete sucker. I personally like Royce as a match even though his true motivations remain unclear. I know, I know—me choosing fangs over fur that has to be a first! It’s just that Chaz hasn’t really shown any alpha tendencies, and I didn’t particularly care for his reaction to Waynest’s blood bond woes, although I did sympathize with his reasons.

I broke-up with the vampire hunter story line long ago, but TAKEN BY THE OTHERS is proof that Jess Haines is doing great things for this genre, and as a result, it might soon be making a comeback on this reader’s shelves.

62 responses to “Review: Taken by the Others by Jess Haines”