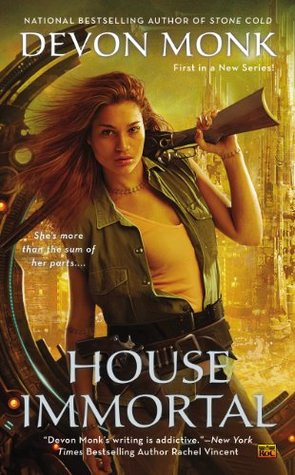 One hundred years ago, eleven powerful ruling Houses consolidated all of the world’s resources and authority into their own grasping hands. Only one power wasn’t placed under the command of a single House: the control over the immortal galvanized....


Matilda Case isn’t like most folk. In fact, she’s unique in the world, the crowning achievement of her father’s experiments, a girl pieced together from bits. Or so she believes, until Abraham Seventh shows up at her door, stitched with life thread just like her and insisting that enemies are coming to kill them all.

Tilly is one of thirteen incredible creations known as the galvanized, stitched together beings immortal and unfathomably strong. For a century, each House has fought for control over the galvanized. Now the Houses are also tangled in a deadly struggle for dominion over death—and Tilly and her kind hold the key to unlocking eternity

The secrets that Tilly must fight to protect are hidden within the very seams of her being. And to get the secrets, her enemies are willing to tear her apart piece by piece.…

So many strange things happened in the first several pages of this book that I made my husband stop constructing whatever diabolical thing he was working on in our basement, so I could have his undivided attention when I read those pages to him out loud.

“The way I saw it, a girl needed three things to start a day right: a hot cup of tea, a sturdy pair of boots, and for the feral beast to die the first time she stabbed it in the brain.”

After that we find out that something in the ground (nano) is presumed to mutate animals like the crocboar our heroine Matilda is currently trying to kill, it’s causally mentioned that said feral beast makes for excellent “dragon chow,” and the farmhand first known as “Neds” quickly becomes Left Ned and Right Ned (b/c Neds has two heads).

Matilda Case is a Frankenstein-esque creation of her father’s, a scientist of  great renown (or notoriety depending on who you ask), but unlike the monster in Shelley’s Frankenstein, Matilda is . . . at least partially . . . truly her father’s daughter.

You see, when Matilda was a child, she became very sick and almost died, but her brother somehow managed to transfer her consciousness into the body of a “stiched” person.

There are twelve other “stitched” people in Matilda’s world known as the galvanized. They are immortal. They do not age, they feel no pain, and they cannot be killed unless you irreversibly scramble their brains.

They’re owned and employed by the eleven houses that control various essential resources (and the WORLD) . . . and to the general population they are . . . celebrities.

FUN FACT—If you google the word “galvanize,” the definition you’ll get is:

1. shock or excite (someone), typically into taking action.

The world-building in this book was amazing.

It’s important that I firmly establish how spectacular the world Monk created in this new series, before I go on to say that by the time I finished House Immortal, I had so many unanswered questions that it took all of my self-restraint to not find her and give her a shakedown (YES, a shakedown) for the next book.

The premise was equally great.

I don’t want to share too much for fear of giving something away, but suffice it to say that the hints Monk drops with just enough frequency to keep us chewing our fingernails rather than throwing things (like books and/or temper tantrums) are well worth the frustration when you finally get to the fist-pounding euphoria of knowing you were right all along (and I so was).

We’ll have to wait until book 2, Infinity Bell, hits bookstores in March to find out. And you’d better believe I will be counting down the days.

Until then, House Immortal by Devon Monk tosses you headfirst into a brave new world of mutated creatures and people, all controlled by Houses grasping for power and . . . immortality. From two-headed farmhands to tiny, fruit-loving octopuses that live in trees (and yes, are kind of cute), I can promise that you have not read anything like this modern parade of human oddities and the results of scientific experiments gone horribly awry. I’d recommend this to anyone looking for not-your-ordinary heroine, or not-your-ordinary anything, really. Strange is good.