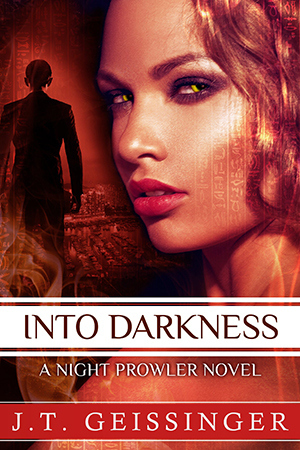 In New Vienna, capital of the oppressive global government formed after the Flash, three things are certain: the sun is poisonous, speaking out is dangerous, and being different will get you killed.

And Lumina Bohn is extraordinarily different.

Living in terror of discovery, Lu knows nothing of her past—but she knows she must pretend to be human to survive. When an incident at work triggers her astonishing powers, she becomes the target of an international manhunt. Only one person can save her: Magnus, the enigmatic stranger haunting her dreams.

Magnus rescues the outcasts called Aberrants from capture and torture. As Lu begins exploring her powers among her people, her feelings for Magnus intensify. He’s determined to stay emotionally distant, yet their smoldering passion soon becomes impossible to resist.

But when a shocking revelation threatens the lives of every remaining Aberrant, Lu and Magnus must risk everything, confronting their enemies in an explosive final stand to save their kind from the darkest fate of all: extinction.

Do you like dark paranormal reads? Enjoy a great romance, with a backdrop of extreme adventure and danger? If so then this series is one you need to read. This is the fifth and final installment of the Night Prowler series, and as much as I loved each book, I certainly had no idea how it would all end. Each of these books feature one couple, and the couple is always part of a story full of danger at every turn. To end this series just by featuring another couple, made me wonder if that would be all there is to it. I should have known that this author, who has never disappointed me in any of her writing, would find a way to both shock me, and yes, awe me as well.

In the beginning of this book, I was a bit confused. I literally, re-looked to make sure I was reading the right book. No lie. And then, I realized that the author had taken the story into the future, and the main character is Lumina. Who Lumina is, and what she is, is just part of the mystery of this story. She lives with her adoptive father, in New Vienna, Austria, in a dystopian world. Yes, Ms. Geissinger went there, and it was nothing short of near genius, as far as taking this series up to another level, when I thought it was a good as it could get in the first place. The other side of the couple is Magnus, the alpha of the Ikati, that inhabit a series of caves in Wales. Horribly scarred, he keeps himself shut off from the possibility of ever finding a mate. How these two meet, is just part of the premise of what this book is all about.

The background and world building of this series has been skillfully woven into the story by the author, as always. The world of the Ikati, or panther shifters, has gone down a dark and twisted path from the beginning. The Ikati have lived in secret since before man existed, until the race is betrayed by crazy sociopath, Caesar, who decides to horrifically announce the presence of the Ikati to the world. Nothing is the same after that, and at the end of the last book the world that the Ikati has built is threatened with extinction.

With the possibility of spoilers and this series ending, I’ve tried to keep the story points to a minimum and hopefully I have succeeded. It’s always hard for me, and I am sure other readers, to read that last book in a beloved series. Will it live up to what the rest of the series was about,and will it end the way you want it to? With this book, Ms. Geissinger had exceeded all my expectations. If you have read the previous books, I think you will be more then pleased with the ending. If you haven’t read these books yet, I can’t recommend them enough. They should be read in order, as the story is a continuing one. They are extremely adult reads, both because of sexual situations, and the dark plot lines.

As a disclaimer, I received this book from the author, in exchange for an honest and fair review, and I am also a member of the author’s street team.

26 responses to “Review: Into Darkness by J.T. Geissinger”