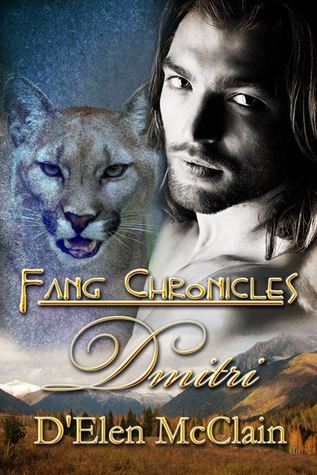 With war on the horizon, Dmitri, liege vampire to the bear clan, offers safe haven to Vorlyk and his new clan. Having another vampire in his territory is difficult but a certain young she-cat makes life impossible. The stalking feline has her eyes set on Dmitri even when his eyes stray elsewhere.

The enemy proves that none of the North American clans is safe and it’s time to fight back. Battle plans are drawn, a traitor continues to wreak havoc, and Dmitri hides a secret that could destroy them all.

Can one she-cat change the deadly tide of war and will Dmitri’s curse keep him from taking a chance on love?

Dmitri is book V in the Fang Chronicles series and should be read in order.

I love this series, and feel it is one of the better indie series that I have read. It’s just more proof for me that indie writers should not be ignored by the reading public. Some of my very favorite authors either are still indie, or started as indie, and I count myself lucky to have found these authors.

Dimitri is the vampire liege for the bear clan. This means as long as the bear clan has him to feed off of them, the enzyme in his bite will keep them healthy and immortal. A win win for both. Full on war between the cats from South America, and the wolves and bears is imminent. To that end, Nicholas’s beastkind, which includes both wolves, and cats that were rescued from South America, have come to stay with the bears. Two of the cats, Nikka and Talya, are immediately attracted to Dmitri, although Dmitri only has eyes for Nikka. Talya is a eighteen, extremely immature, and only has one arm, after being tortured by the male cats in South America. Nikka is older than Talya, and is mute, due also to being tortured in the past. It isn’t a love triangle, because Dmitri doesn’t want to have anything to do with Talya, but she sure doesn’t take the hint. Of course a lot of problems ensue due entirely to Talya and her antics.

Over and above all that however, this book is about the war with the cats(mountain lions) of South America. It’s not pretty, by any means, and the author doesn’t have a problem with killing off characters, but then it is war after all. In this world building, the male cats are cruel, and treat their women as slaves and/or sexual objects. The female cats know nothing good of the world. So this is also a story about the rescued females learning to live in a much better world. But first the cats must be defeated.

The different dynamics between all the different beastkind, and the vampires they live with, was also a big part of the world building. Adding the bears to this ongoing story, brought a whole different dimension to the world of these shifters. Each different shifter race has it’s own customs and ceremonies. Pretty fascinating stuff, I must say.

I enjoyed Dmitri and Nikka’s romance, and their overcoming obstacles that include Talya, and the fact that Nikka is mute. Of course I didn’t enjoy the war, but we finally get to see what happens with all of that. The author wraps up a lot of things from the previous books, and had I not had the next book ready to read for review, I would have thought the series was over with this one. However, the author does have one more story to tell in this series, and I will be reading that one very soon.

This latest entry in the Fang Chronicles was well written, with good characters, most of which readers already know from previous books. Lots of action, and hot sex scenes round out this story. I think paranormal romance fans will find a lot to like about this book, and the whole series.