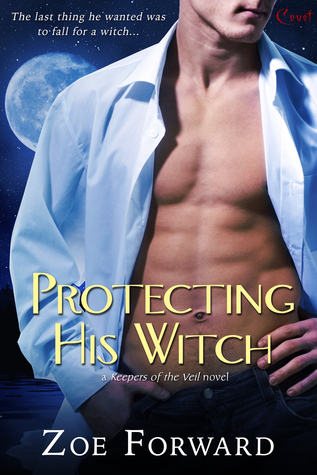 The last thing he wanted was to fall for a witch...

Veterinarian Kat Ramsey hasn't a clue that she's a witch. Sure, she can read minds, and there's the whole "dimension-hopping" issue that she can't quite control, but Kat is determined to keep things normal. That is, until she accidentally hops into the Otherworld, and runs smack into Matthew Ryan―the seriously hot one-night stand from years ago who shoved her out of his dorm. Naked.


And there's the tiny matter of the curse she gave him.

May you never find satisfaction with another woman. Billionaire and former druid Matthew Ryan hasn't forgotten the curse, or the witch who gave it to him. Kat's unexpected return means the curse will finally be broken. Unfortunately, his libido has other ideas―like how to get her back into his bed one last time. But far more worrying is his suspicion that Kat is the seventh Pleiades witch. Because while he's turned his back on his druidic ways, he's still bound to protect the woman who made his life hell..


Witches, druids and curses, that’s what’s in store for you if you read this book. I should say curse, as there is only one, but it’s a doozy. Of course there’s also plenty of romance.

Kat has a problem that’s been bothering her for years. She is able to jump dimensions, between two different ones. She has no control of when, or where it happens, but only knows that when it happens, she always ends up in close proximity to Matt Ryan. They first meet at a frat party while in college. Before the night is over, she has had her first, and only one night stand. The morning after is not the best, and before it’s over, she has cursed him to never find satisfaction with another woman. Pretty major curse, as curses go, I think. This is the story of what happens when they meet again after ten years absence from each other. She’s now twenty nine, and still has no idea that she is a witch.

Kat is an interesting character. She’s had these weird episodes since she was a teenager, but instead of being in a mental ward somewhere, she has become a veterinarian, and is also a champion salsa dancer. She has a gay best friend(and salsa partner) Riley, and he ended up being a favorite character of the book for me, as he was the only fun character. The rest of the characters were pretty intense. Matt, is understandably not happy about the curse. However, my problem with him is, when he sees her ten years after the curse, his reaction was a bit unbelievable, and that kind of bothered me; it just wasn’t as real of a reaction, as I thought it should have been. Matt is now the CEO of his late step-father’s company, and a billionaire. Oh, and he just happens to be a non-practicing druid.

The jumping between dimensions premise was different for me, as far as premises go. It was interesting when she compared the sameness versus the differences of the two worlds. When she finally finds out what she is, and starts embracing it, things get even more interesting. New characters get involved, life, or death situations start happening, and six fellow sister witches get introduced. At it’s heart though, this is the story of the romance between Kat and Matt, and it’s a pretty good one at that. For a couple that have the history these two have, they manage to get in a number of sensual situations, and of course fall in love.

I enjoyed the read for the most part. There were a couple of plot holes, here and there, but I only mention it because that is something I tend to notice, like I usually notice grammatical mistakes. I can’t discuss the plot holes without giving away a major story line, so i will just say, enough said, and let it go at that.

Good story, good couple, a good premise, and I look forward to reading the next in the series. There’s plenty of characters introduced that could have their own book, and actually this book includes a set up for what I think is the next one, as well.

16 responses to “Review: Protecting His Witch by Zoe Forward”