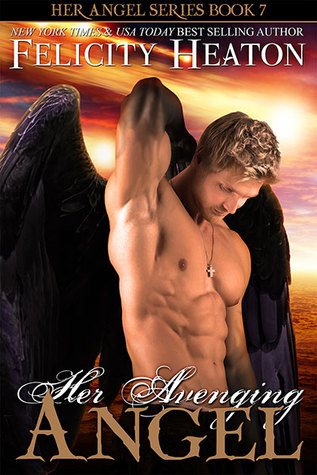 Once a proud angel of Heaven, Nevar is now a servant of Hell, bound to a new master—the King of Demons. Consumed by darkness and driven to seek revenge, he set in motion a series of events that awakened the Great Destroyer, a force that will bring about the apocalypse. Now, he is the creature’s master and the fate of our world rests in the hands of an angel with only darkness in his heart.

Lost in the mortal realm without any recollection of how she came to be there, Lysia is only aware that she has survived a great battle. When she stumbles into a demon bar, she finds more than a chance to discover what happened to her—she finds a dark and deadly angel warrior who stirs fire in her veins and awakens soul-searing passion she cannot deny.

With the mounting threat of the Great Destroyer, the forces of Heaven and Hell against him, and a band of dangerous angels intent on capturing Lysia on his heels, can Nevar protect the beautiful woman who is light to his darkness and find the strength to save the world?

You don’t get much darker than the apocalypse, and HER AVENGING ANGEL nailed the end-of-the-world vibe by going all out with epic battles between Heaven & Hell, the convergence of the thirteen, and of course the Great Destroyer story line. However, this is Felicity Heaton a.k.a. the queen of Paranormal Romance which means that in spite of all of the doom and gloom, there’s still plenty of steam, and a HEA that’ll rock your world. I strongly recommend that you read all of the previous novels before adding this one to your to-be-read pile because it’s all protagonists on deck in this installment due to the climactic nature of the plot arc, plus you’ll want one-on-one time with all of this series’ heroes, trust me!

It’s no secret that angels are my least favourite supernatural on account of their tendency to spout Bible verses, and to assume the role of goodie-two-shoes, but Nevar is as far from the stereotypical holier-than-thou as you can get. He’s a fallen bad boy, with a chip on his shoulder, and nothing left to lose—that is, until he meets Lysia. I enjoyed watching his transformation from dark and brooding to the world’s best chance of survival; as a recovering Euphoria addict, and contracted to the King of Demons, Nevar had more than his fair share of challenges to overcome. Calling him a reluctant hero would be putting it mildly, but true love has a way of changing a person, or in this case, a demonic angel—mind blowing sex, and twelve unlikely allies certainly help too!

Lysia was the perfect example of how appearances can be deceiving; I’d expected her to surpass Nevar in all things evil, but instead she was the embodiment of everything that’s good in the HER ANGEL universe. Readers were first introduced to her character when she strolls into a bar buck naked, and kicks a vampire’s ass. Needless to say, I liked her immediately! Her abilities were mind boggling, yet she had a vulnerability to her that was magnetic to the fallen angel’s alpha protective nature. Heaton made sure that we got our nookie fix before the action started with scene-after-scene of beach sex; there was however one downside to this book’s romantic elements, and that was the v-card, but that’s a personal pet peeve of mine, and the author didn’t dwell on it, so don’t let it deter you.

I enjoyed the twist that the angels of the apocalypse brought to the plot line, and watching all of this series’ previous characters come together to back Nevar & Lysia was exciting. I especially liked when Asmodeus proved his servant wrong, and Erin’s snarky way of kicking butt and taking names always manages to leave me grinning from ear-to-ear. I loved how vividly the author described the final battle between Heaven, Hell, and the Great Destroyer; that scene leapt off of the pages, and exceeded my expectations in every way. Heaton left readers in suspense until the final chapter for the protagonists’ HEA, however it was heart-meltingly sweet, and so worth the wait! I’m not sure who’ll star in the next book, but the original fallen are loose in the mortal realm which means that the thirteen, now fourteen’s job is far from over.

I always thought that the world would end in fire, but according to HER AVENGING ANGEL it concludes with bow chicka wow wow!

39 responses to “Review: Her Avenging Angel by Felicity Heaton”