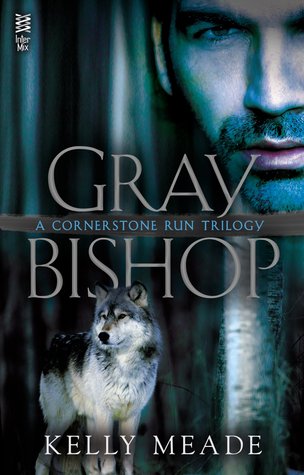 Some people need something to fight for…

With the attacks on their homes escalating and human half-breeds seeking sanctuary among them, the loup garou are reaching their breaking point. Two, in particular.

After failing to stop his little brother’s kidnapping years ago, Bishop McQueen angrily broods on his shame, though no one else blames him.

Jillian Reynolds is still dealing with a tragic accident that took everything she ever wanted from life. And her attraction to Bishop is only making things more difficult.

When word reaches them that Jillian's hometown is under attack, the Alpha takes Bishop, Jillian, and a group of enforcers to assist in the battle. And it is in this chaos that both Bishop and Jillian will have to face their pasts—and the true feelings they have for each other—if they are going to survive…

INCLUDES A PREVIEW OF THE NEXT TITLE IN THE CORNERSTONE TRILOGY, WHITE KNIGHT.


This one’s going to be a doozy to review without spoilers because most of the main plot line revolved around one major event that set a chain reaction in motion, but I am going to try. If I fail, well consider this your warning! Apparently Kelly Meade (Meding) is known for her dark writing style although admittedly I have yet to read her DREG CITY series; however that most certainly is proving to be the case as far as her CORNERSTONE RUN trilogy is concerned. BLACK ROOK was dark, but GRAY BISHOP was downright pitch black, not exactly what comes to mind when I think of Paranormal Romance, yet you won’t hear me complaining! And, just to give you an idea of what I’m talking about; there were two sex scenes (yes, I counted) compared to the staggering number of deaths which totaled in the hundreds. That being said, there was a HEA at the end of the tunnel, both for the main couple and for two other pairings.

Initially Jillian & Bishop’s relationship was very à la Romeo and Juliet in that they are soon-to-be Alphas of their respective runs, and can never be more than bed buddies on account of their family responsibilities. Death is the only way they can be together, although in this case it’s not theirs, but rather someone(s) else’s which means that their love comes at a very high price. I guessed the key to their mating pretty early on, however because of the means and the genre under which is series is shelved, I assumed that the author would find another way, so when my speculations proved true I couldn’t avoid shedding a few tears. Meade is one cold hearted writer—I even told her so on Twitter, and she replied with an ominous cackle. There is an upside to forbidden love though, when the protagonists do get it on, they make it count which means that those two sex scenes I mentioned earlier are real scorchers!

I wish that Bishop had played a larger role in his own story; I found that his character was somewhat overshadowed by his brother, Knight. I get that the author was setting up for the next book, and that he’s key to this trilogy’s main plot arc, however at certain points I did find myself forgetting that GRAY BISHOP was supposed to be about the eldest McQueen sibling. That complaint aside, I did like the gray wolf, he’s a true Alpha in every sense of the word, and his actions reflected that every step of the way. Jillian’s backstory is tragic, and her present circumstances weren’t much better, but she too proved worthy of her status within the pack hierarchy on multiple occasions, and I absolutely loved Reynolds and Bishop as a power couple. The previous installment featured a werewolf / Magi matching, so I was thrilled that a true loup garou pairing happened this time around.

I liked how certain aspects of this story were linked to the McQueens’ mother, and I enjoyed the brothers’ interactions with Colin Corman even though I can’t really say more than that because—spoiler! The half-breed triplets were once again wrecking havoc on the quaint town of Cornerstone, and this time around they have feral wolves in toe. Shay finally came out of her shell, but her happiness was short-lived by virtue of Meade being EVIL. We also get 100% confirmation about what happened to Knight in the previous book, and although that particular subject still makes me horribly uncomfortable, it was lessened by the fact that he’s a male. Hmm… double-standard much? The final chapters end on a high note with several weddings, only to immediately come crashing down on readers’ heads afterward because, again, Meade = EVIL.

GRAY BISHOP gave me the worst case of feels I’ve had in a long time, but I fully expect myself to cheer out loud when the villains get what’s coming to them in WHITE KNIGHT. Watch out girls, the McQueens are coming for YOU!

Was this review helpful? If so, please consider liking it on GoodReads or for for it on Amazon!