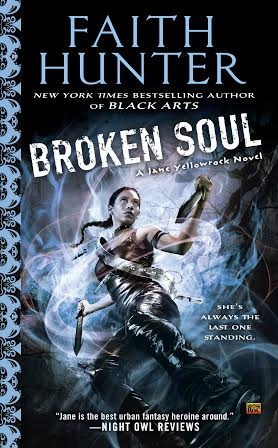 Jane Yellowrock is a vampire killer for hire—but other creatures of the night still need to watch their backs....

When the Master of the city of New Orleans asks Jane to improve security for a future visit from a delegation of European vampires, she names an exorbitant price—and Leo is willing to pay. That’s because the European vamps want Leo’s territory, and he knows that he needs Jane to prevent a total bloodbath. Leo, however, doesn’t mention how this new job will change Jane’s life or the danger it will bring her and her team.

Jane has more to worry about than some greedy vampires. There’s a vicious creature stalking the streets of New Orleans, and its agenda seems to be ripping Leo and her to pieces. Now Jane just has to figure out how to kill something she can’t even see….

And I’m in a book funk again.

For me, that’s the mark of a truly great series—every time you venture forth into its world, ready for a new adventure with well-loved characters, the inevitable end hangs like a cloud . . .

You start the book like it’s water and you’re dying of thirst, but the further along you get, you begin to feel taunted . . . by the growing percentage of completion, or the diminishing number of pages . . . and then it’s over . . . until next time.

Yeah. You know what I’m talking about.

Such is my relationship with Jane Yellowrock . . .

Early in the series, a certain magical artifact began to complicate things for Jane. Since it’s first appearance, the blood diamond has changed hands several times, but even hidden away in a safety deposit box, there’s always someone (or something) who knows about it, and wants to get their hands on it.

So it’s not a surprise when Jane gets a call from a much abused (sounding) Reach, warning her that a couple of vamps found him, tortured him for information about her and Leo (that he gave up),  and oh, by the way, they were probably already in New Orleans, b/c all of this took place a WEEK ago, but he couldn’t call before now (b/c torture), that she assumed it (once again) had something to do with the blood diamond.

I’m not saying that it did, or it didn’t. I’m just saying it would probably be a good idea to go ahead and destroy the blasted thing, which has (supposedly) been the plan all along.

And if it can’t be destroyed, then she should take a boat into the middle of the ocean, turn herself in a bird, fly as far as she can and still make the return trip, and drop it.

Much to my disappointment, the European Council of Mithrin vampires don’t make an appearance in this book, Hunter is saving that for Dark Heir, but never fear—there is PLENTY going on in Broken Soul to give fellow Jane fans their fix. Just b/c the Council fangheads aren’t stateside just yet, doesn’t mean there aren’t any European vamps in town, but I kind of felt like the villain in this installment took a backseat to other important plot developments. I wouldn’t go so far as to say that this book felt like filler until the now thoroughly hyped-up Council vampires show up, it just didn’t feel as personal as I’m used to with the Big Bads in this series.

However, looking back, I think it was necessary—those previously mentioned developments feel mighty important to the future of Jane, and they more than made up for any perceived lack on the villain front. Without getting spoilery, some of those developments include:

Okay, so that’s all I can give you without spoilers.

On the character development front, Eli and Kid (aka Alex) continue to be a fun and colorful presence in Jane’s life. One of my favorite Eli quotes from the uncorrected proof is:

“You hurt her and I’ll skin you alive and feed your carcass to the wild boars in the swamps. You copy?”

Hmm . . . I wonder to whom he’s speaking . . . and whom he’s talking about . . . Could Eli be talking to the man who brought Jane flowers, and when she didn’t know what to do with them, told her gently:

“They go in a vase. On the nighstand by your bed. Or on the kitchen table. Or on the coffee table in the living room. They go where you can see them most often, and, seeing them, remember that you deserve flowers.”

I can and will say that it is worth the wait. View Spoiler »NOT Rick. And thank goodness for that. *plots slow and painful death of Rick* « Hide Spoiler

Broken Soul is just the latest fantastic installment in Faith Hunter’s Jane Yellowrock series, which continues to be one of my personal favorites in Urban Fantasy. Old questions are answered, new questions are raised, and though far (FAR *crosses fingers*) from being finished, lovers-of-Jane finally, FINALLY get some satisfaction in the a-male-worthy-of-the-heroine department.

Other books in the Jane Yellowrock series: