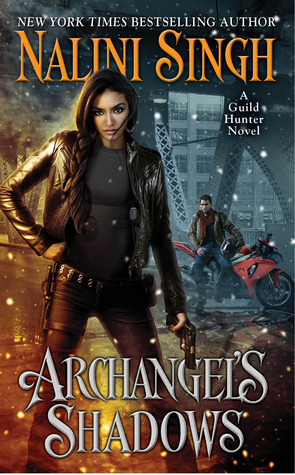 Return to New York Times bestselling author Nalini Singh’s sensual and painfully beautiful Guild Hunter world in her new novel of sacrifice, loyalty, and the choices of love that can shatter the heart.

In the wake of a brutal war, the archangel Raphael and his hunter consort, Elena, are dealing with the treacherously shifting tides of archangelic politics and the people of a battered but not broken city. The last thing their city needs is more death, especially a death that bears the eerie signature of an insane enemy archangel who cannot—should not—be walking the streets.

This hunt must be undertaken with stealth and without alerting their people. It must be handled by those who can become shadows themselves…

Ash is a gifted tracker and a woman cursed with the ability to sense the secrets of anyone she touches. But there’s one man she knows all too well without a single instant of skin contact: Janvier, the dangerously sexy Cajun vampire who has fascinated and infuriated her for years. Now, as they track down a merciless killer, their cat-and-mouse game of flirtation and provocation has turned into a profound one of the heart. And this time, it is Ash’s secret, dark and terrible, that threatens to destroy them both.

So I know I said that I don’t like angels in Urban Fantasy in my last review, but I should have qualified that statement: if the angels are simply winged, humanoid beings without ties to religion (and only called “angels” for lack of a better description), then I like them juuuuust fiiiiiiine. And if they happen to be the angels in Nalini Singh’s Guild Hunter books, then I flat-out L-O-V-E them.

Guild Hunter is kind of an odd series. It’s part UF, part PNR, and it’s kind of a perfect marriage between the two. You’ve got Elena and Raphael, the MCs for the series overall, but then you’ve got a handful of books, still continuing the main plot, but focused on other, well-liked secondaries like you find in PNR.

Elena and Raphael still play important roles in those books, and even have the occasional POV shift, but in those other books we get an opportunity to get a deeper look at characters previously viewed from the sidelines.

The first time Singh did this was in book 4, Archangel’s Blade, and ever since then, I’ve been anxiously awaiting this book—the Ash and Janvier book.

Ash and Janvier have been consistently providing moments of hilarity, beginning with the very first installment. Ash was painted as a violent and slightly unbalanced guild hunter, and Janvier, the roguishly handsome and incorrigibly charming vampire she was often hired to hunt. Janvier would lead her on a merry chase, only to get the contract on him nullified within hours of Ash catching up to him:

“You made me traipse through the bayou for weeks,” she muttered now. “Then, right when I had you, you made nice with the angel you’d pissed off.” It wasn’t the first time he’d done that either. “You knew how mad that made me—why did you keep doing it?”

Lifting their clasped hands, he pressed a kiss to her knuckles. “I was courting you.”

It was obvious that there was more going on with these two, but Ash always held Janvier at a distance. In Archangel’s Shadows we find out why. *whispers* And it’s goooooood.

The PNR format means that an HEA is inevitable, but if you want to know the ends and outs . . . you’re going to have to read it for yourself. All I can say without spoiling it, is that I was impressed with Singh’s spin on the (IMO) too often employed “but we can’t EVER be together, b/c insert-not-a-reason-here” track.

Ash had a legitimate reason, and Singh’s solution was nothing less than brilliant. *tips hat*

I also have a new book to anxiously await.

I wouldn’t go so far as to say that Naasir stole the spotlight (b/c Janvier *swoon*), but it was close. Between Dimintri’s remembrances from Naasir’s childhood:

He’d never forget what Naasir had said to him when Dmitri yelled that he didn’t intend to bury another child and that Naasir needed to have a care for his life.

And his obvious feral nature in the present:

“I told Caliane that trying to civilize me is like trying to civilize a jungle cat,” Naasir said with a shrug. “We pretend to like people until we get hungry and want fresh meat.” A glance around, a glint in his eye. “I honestly do like you all. I haven’t thought about eating you for at least two centuries.”

I am dying to find out what this wild, yet completely enthralling, beast is.  *grabby hands*

Archangel’s Shadows was everything  I wanted it to be. It did justice to two of my favorite characters, making their story worth the wait, and still kept me full of anticipation for the next chapter . . .