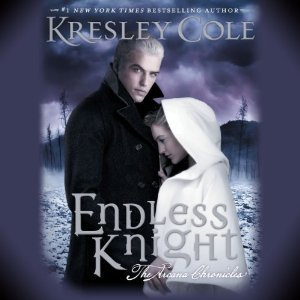 In this seductive follow-up to Poison Princess, New York Times best-selling author Kresley Cole takes us deeper into the dark world of the Arcana Chronicles.

With threats lurking around every corner, Evie is forced to trust her newfound alliance. Together they must fight not only other Arcana, but also Bagmen zombies, post-apocalyptic storms, and cannibals.

Going into POISON PRINCESS I couldn’t help thinking Young Adult—this is going to suck, but Kresley Cole’s writing quickly won me over to Evie’s side, and then Emma Galvin sealed the deal with her mesmerizing narration. And now, here I am, completely committed to this series, and putting my stamp of approval on book 2. The characters show a level of maturity that I never expected from this genre, and there was even a sex scene in this installment. Yes folks, don’t let these teenagers fool you, this is grown up YA at its best. The author does such an amazing job of making readers dislike Death that when the love triangle began to develop I was convinced that nothing could sway me from Team Deveaux. Well, now I’m eating crow because Aric was so skillfully fleshed out that the Cajun is just a distant memory. Jackson who?

For a girl that doesn’t want to play the game, Evie sure is racking up Arcana symbols! I love how far she’s come from that scared young woman refusing to accept her new, albeit harsh reality, to the ring leader of an unlikely alliance of Arcana. Greene shows mercy when the situation calls for it, and still believes that more than one power card can survive the coming battle, but when he friends’ lives are on the line, she doesn’t hesitate to do what must be done. I enjoyed witnessing the Empress embrace her powers in ENDLESS KNIGHT; her abilities may be the complete opposite of Death’s, however life can, and does annihilate just as easily. Evie continues to surprise me at every turn from how she deals with the teeth (carnivores), to certain characters’ two-facedness, to Aric’s unexpected past. The Red Queen is no pushover!

Coles’ dystopian world-building marched forward in this installment with the Hierophant, Devil, Tower, Strength, Judgment, and World cards. I liked learning more about their tableaux, calls, and powers as well as the characters that they represent. I also developed a soft spot for Scarface, Cyclops, and Maneater—Lark’s wolves. The plot line was uncomplicated: escape Death, and when that fails, survive him. I enjoyed the showdown leading up to Evie’s capture, and her time with Aric was enlightening to say the least. I was happy that Jackson was finally clued in to the game and ecstatic when he and Evie found a brief respite in each other’s arms. But of course, just when Greene decides to trust him his deception comes to light.

This novel took so many turns that I did not see coming, and oddly enough, I found myself rooting for the bad guy! Like most other readers, love triangles are the bane of my existence, but the one in ENDLESS KNIGHT is so far removed from what is typical of this trope that I wasn’t the least bit upset by it when it eventually surfaced. I’d mentioned in my review of book 1 that Emma Galvin’s narration carried that installment, so I was relieved to see her flying solo this time around. I’m not knocking Keith Nobbs’ delivery, but I prefer to give credit where it’s due. Galvin excels at bringing THE ARCANA CHRONICLES’ dark tone to life while still doing the youthful characters justice with a YA authenticity that so many performers in this genre lack.

ENDLESS KNIGHT concluded with one heck of a cliffhanger, but that’s a recipe for success as far as pre-orders of DEAD OF WINTER go because you can bet I’ll be glued to my earbuds come hell or high water on January 6th, 2015.