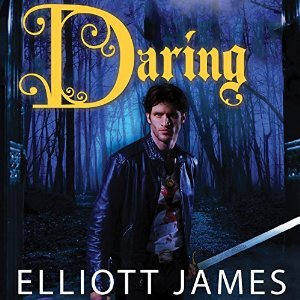 THE WEREWOLVES HAVE A NEW LEADER...AND HE CANNOT BE STOPPED.

Werewolf packs are being united and absorbed into an army of super soldiers by a mysterious figure who speaks like an angel and fights like a demon. And every Knight Templar -- keepers of the magical peace between mankind and magickind -- who tries to get close to this big bad wolf winds up dead. No knight can infiltrate a group whose members can smell a human from a mile away...no knight except one.

John Charming. Ex knight. Current werewolf. Hunted by the men who trained him, he now might be their only salvation. But animal instincts are rising up to claim John more powerfully than ever before, and he must decide if this new leader of wolves is a madman...or a messiah.


I was left with mixed feelings when I finished CHARMING a few months ago; I liked John’s character, Roger Wayne’s narration, and the author’s quirky writing style, but the love interest, and info dumps were definite cons. However, when I read DARING’s blurb and discovered that the werewolves were going to be front-and-center in round two, I just knew that this series deserved a second chance. And, even though I didn’t love this installment either, it was more along the lines of what I’ve come to expect from Urban Fantasy, and my issues with this one were vastly different that its predecessor, so at least it was a step in the right direction. The story was darker, the humour more subdued, and I did struggle to see the links between the four parts, but it all came together in the end which made this novel marginally better than its predecessor.

The prelude was a hoot, James shared a list of the ‘top ten things that people who didn’t read the first book really ought to know’ which served as a good recap while also turning a boring necessity into a fun intro. The opening section was my favourite because it not only explored John’s past as a Knight, but provided some much needed clarification about his insta-attraction to Sig, and set the tone for the rest of the story. The second part was somewhat of a mixed bag; I liked learning more about this universe’s werewolves, although certain aspects were a little overly touchy feely for me—too much zen, not enough predator. The final two were the meatier pieces with plenty of action, unanticipated twists, and an ah-ha ending. The world-building was also greatly muted which made this installment more about the journey than the magical rules which was a welcomed tweak.

DARING was nowhere near as funny as book 1, but given the nature of this tale, it fit. That’s not to say that I still didn’t crack a couple of smiles while listening because I did, however the overall tone was much heavier. I was disappointed that the majority of the secondary characters that the protagonist formed connections with previously were for the most part MIA, although they were replaced with new ones, so at least the author found a way to fill that void. Sig’s role was minimal which made me exceedingly happy because she was my main problem with CHARMING, so I liked that the Valkyrie was pushed to the back burner for the time being. John’s POV continued to delight and entertain; I loved how he talked directly to the reader, and his keen wit and sarcastic dialogue are the main reasons why I am diggin’ this series so much.

As expected, the narrator delivered another winning performance which was why I had no qualms about pre-ordering this audiobook. His voice is well-suited for James’ writing style, and he absolutely nailed Charming’s first person POV. The hero gets his butt handed to him on multiple occasions, and Roger Wayne helped to add authenticity to that fact by slurring his words as though he himself had gotten punched in the teeth. He also showed adaptability as a narrator by taking a step back from the first installment’s snark, and adopting the more somber tone that this tale demanded. It normally takes me a week on average to listen to nine+ hours, but in this case my listening time was cut in half thanks in large part to Wayne.

DARING is proof that werewolves make everything better!