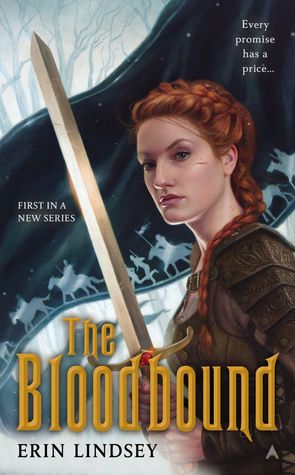 Of all those in the King of Alden’s retinue, the bloodbinders are the most prized. The magic they wield can forge invaluable weapons, ones that make soldiers like Lady Alix Black unerringly lethal. However, the bloodbinders’ powers can do so much more—and so much worse…

A cunning and impetuous scout, Alix only wishes to serve quietly on the edges of the action. But when the king is betrayed by his own brother and left to die at the hands of attacking Oridian forces, she winds up single-handedly saving her sovereign.

Suddenly, she is head of the king’s personal guard, an honor made all the more dubious by the king’s exile from his own court. Surrounded by enemies, Alix must help him reclaim his crown, all the while attempting to repel the relentless tide of invaders led by the Priest, most feared of Oridia’s lords.

But while Alix’s king commands her duty, both he and a fellow scout lay claim to her heart. And when the time comes, she may need to choose between the two men who need her most…

Fantasy Romance is one of my favorite sub-genres, but I rarely have an opportunity to read it, b/c there’s not a lot of it available. This makes no sense to me, b/c AWESOME–it’s Fantasy AND it’s Romance . . . what’s not to like?

I think some people automatically shoot down anything designated as Fantasy, b/c they get overwhelmed by visions of infinite pages, multiple POVs, gruesome battle after gruesome battle, etc.

Fantasy Romance is an entirely different beast. Yeah, some of them are a bit longer (not this one) then the average book, and yeah, there is often more than one POV (only two), but the focus is different. The characters are still trying to save the world (or the kingdom), but the story is focused primarily on the heroine and her love interest(s), NOT on so many characters and organizations that a glossary is required to keep track of them all.

At least that’s my take. FYI.

And so The Bloodbound by Erin Lindsey had been on my watchlist long before I had the opportunity to read it.

I instantly liked our heroine. The story opens in the heat of battle, and we meet Alix as she decides to run headlong into danger when she sees her leader in trouble. When a friend tries to reason with her–reminds her that their orders are to stay put–her response is, “And their orders were to attack.”

AND that is my reasoning every time I’m driving and have to pass some idiot on the right. You see . . . orders (rules, laws, speed limits, whatever) only work if everyone follows them . . . and when everything goes according to plan. Sometimes you just have to roll with situation you’re thrust into, damn your orders, and Alix gets that.

So does her brother:

“We’re not strong enough to confront the enemy directly, but we’ve become quite adept a hit-and-run strikes–taking out their scouting parties, raiding their camps, targeting their supply lines, that sort of thing. Some of the men disapprove of such devices–they’ve got fool-headed ideas about glory and honor–but I’m no martyr. I do what I can with the resources at my disposal, and no more.”

I realize that’s a lot of war talk for a Fantasy that I’m trying to differentiate based on the Romance aspect, but there is a war going on, and there are battles. They just aren’t the page after page (after page) of lopping off limbs and heads (and thank the nine Virtues for that) type of battles.

Speaking of the nine Virtues, the world-building left a bit to be desired. To save you the trouble, here are the Virtues I was able to figure out:

Beyond that . . . I got nuthin’. I appreciate the lack of an info dump, but by the end of the book, I still hadn’t gleaned enough information to know what all nine Virtues were, let alone understand their importance. I had similar issues with other aspects of the world-building, but it wasn’t a huge problem for me, b/c I was too caught up in the story.

Why was I so caught up in the story?

Alix is Sif with red hair. And Erik is Thor, and Tomald is Loki. *shrugs* Hey, you have to get your inspiration somewhere, and I’m pretty convinced that’s where Lindsey’s came from:

Tom sat beneath the window with his back to the wall, one arm draped across his knee. He made no move to stand as Erik entered. He did not even raise his head.

Don’t misunderstand–this is a completely new and original book, and one that I very much enjoyed. All I’m saying is that if you’re a fan of one (and I SO am), then it’s likely you’ll be a fan of the other (I SO was).

Full of witty banter, immensely likable characters, and swoons aplenty, The Bloodbound by Erin Lindsey is not to be missed. There’s something for fans of both Romance and Fantasy, and I can’t wait to see what Lindsey has for us next.

64 responses to “Review: The Bloodbound by Erin Lindsey (@jessicadhaluska, @ETettensor)”