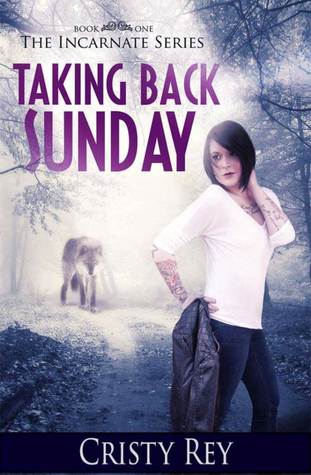 After five years on the run, Sunday has finally settled into a seemingly normal life in Columbia, South Carolina. What her two best friends don’t know is that Sunday has a secret past. She is the Incarnate, a conduit of mystical energy transcendent of the mundane and the divine. For most of her life, she served under Bernadette, the most powerful witch in the Northwest. Her power is terrifying, and what she remembers of her past—and what she doesn’t—haunts her. In the year that she’s been attempting to be anything but the Incarnate, Sunday has fought her abilities tooth and nail, but it’s been worth it. When Sunday joins her friends’ coven for an innocent gathering, Sunday discovers a darkness hidden beneath the blanket of the coven’s magic and she is determined to find out who is behind it and what she has planned.

For the last four years, Cyrus has been the point man on the contract to recapture the Incarnate and deliver her to the Pastophori of Iset. A gifted tracker and a fearless werewolf, he harbors a wild, inexplicable passion for the Incarnate that has driven him to hunt her. He was one of the original captors that brought her to Bernadette when his obsession with her began. Having found her, Cyrus and his pack find themselves torn between two objectives: take her by force and deliver her to yet another group of fanatics, or help her uncover the traitor among her coven.

Paranormal reads usually feature the same sorts of paranormal creatures or characters, over and over, and I am okay with that. But when I come across a book that features a character that is paranormal, but really different, I say bring it on!

Sunday has been on the run for years now. She knows if she lets her guard down, or stays in one place for any length of time, she could be found, and it won’t be good. In this world, Sunday is what is known as an Incarnate. From what I can tell, she’s the only one in the world, and is pretty much the scariest being of all that exists. There’s a bounty on her head, and other paranormal groups want her so they can control her power. The group that was picked to hunt her down is the Alaskan werewolf pack. Two wolves have been hunting her for years, when they finally get a recent lead on her. Both of the wolves that are hunting her actually kidnapped her when she was young, so they already know her. One of them in particular, Cyrus, has hated her for a long time. She, on the other hand, has no memory of him. Sunday might be the scariest being in the world, but all she wants is a normal life, with friends, and a permanent home.

I really loved the character of Sunday. She was so different, not only because she is one of a kind, but because she is someone that could care less about what she is, and only wants to be normal. She doesn’t want to be a monster, or a kick butt hero. She finally, for the first time in her life, has two good friends. And when she meets Cyrus, she thinks she just might be able to have a relationship. Cyrus is a werewolf and a hunter that has spent a good part of the last ten years wanting nothing more then to kill Sunday. When he meets her again, he realizes that he could never hate her, and he also realizes just how honorable he really is, when it comes to Sunday.

The premise of a character with so much power was fascinating to me, even if I never really understood exactly what she is. I know she has power over nature, and pretty much all creatures-human or not. Besides werewolves, this story also featured vampires, witches, a coven, and a warlock-which in this case is not a male witch. The world building was pretty well imagined as far as the different creatures, what their powers are, and what they look like in this authors world.

I enjoyed this read for the most part. There’s lots of action, deaths, scary situations, and romance. I hate to have to even mention this, but I think this book would benefit from another editing. My inner editor was on the job throughout, and it should be noted. However, it should also be noted that it took nothing away from the story for me. I got completely involved in the story, and it was a really fast read for me. I definitely plan to read the next in this series when it comes out. I recommend this to adult readers that enjoy urban fantasy and/or paranormal romance.

38 responses to “Review: Taking Back Sunday by Cristy Rey”