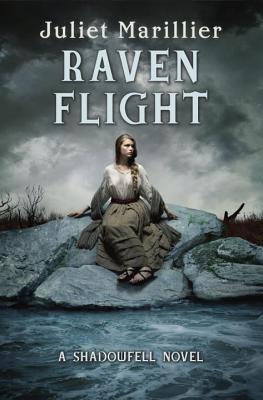 After completing the long, weary journey to the rebel hiding ground at Shadowfell, Neryn is now a vital part of their plan to overthrow the tyrannical King Keldec. Every step she takes toward perfecting her skills as a powerful, once-in-a-generation Caller gets them closer to their goal. But first she must seek out the disparate leaders of the Good Folk to complete her training--and the time she has left is wearing thing.Meanwhile, Neryn's beloved, the double agent Flint, is summoned to the king's court. There the king's slipping confidence puts Flint in great danger. Yet his connection to Neryn is so strong that they reach each other in their dreams, sharing painful but precious glimpses into on another's lives. Their love is regarded warily by their rebel allies, for placing any emotion above the cold logic of the cause puts the entire movement at risk. But their bond also reveals valuable information, for the tide of the war may soon be turning...

I wasn’t very impressed with the first installment of this trilogy . . . But I’m a big enough Marillier fan, and I saw enough glimpses of the excellence I’ve come to expect from her that it wasn’t difficult to make myself continue with the series.

RAVEN FLIGHT was everything I expected SHADOWFELL to be and then some. Ominous foreshadowings, beautifully imagined Fae creatures (and by “beautifully” I don’t mean pretty—I mean convincingly alien creatures to blow your friggin’ mind), the bittersweet longing of new love kept apart, heartbreaking but necessary truths learned by both the characters and the reader.<——THIS is why Juliet Marillier will always have a spot on the bookshelf of my heart.

In RAVEN FLIGHT, we get to know some of the characters we’d barely met at the end of SHADOWFELL.

There are several types of stock female warrior characters. My first impression of Tali was that she was a female warrior of the hardass I-have-no-time-for-puny-nonwarrior-females-like-you-go-mend-something variety, and honestly, it took some time for that impression to be disproved.

When Regan tells Tali she’s to guard Neryn on her quest to seek out the Guardians, Tali doesn’t handle it well . . .

She rants. She raves. She pleads. Only then does she comply, but she does not do it gracefully.

For the first part of their travels, they barely speak a word to each other (b/c sulking). BUT. Nothing brings people together like conflict (Just ask Harry, Ron, and Hermione).

Tali and Neryn are doing their stealthy travel thing when Tali leaves Neryn to fish or scout or something. So Neryn’s just chillin’ behind some scrub when she hears their predetermined warning signal, but instead of taking off on her own like she’s supposed to, she decides to investigate.

And a good thing she did, b/c Tali’s in a fight for her life, five-on-one, and she’s good, but nobody’s that good. Except Neryn isn’t as sneaky sneaky as she thinks she is, and pretty quickly she’s caught and used as a hostage against Tali—NOT good.

So what does Neryn do?

Uses her super Callerness, of course.

And what shows up to help?

Help us! Quickly, help!
The river roiled and rose up…
The water rose to my waist. A figure rose with it, taller than a tall man, a being all ripples and eddies and swirls, its features discernible as darker patches in the watery substance of its face. Flotsam adhered to its head, forming what might be hair or a hat, and within its body twigs and leaves washed about as if carried on the natural flow of the river. In its liquid face a mouth opened, a great dark cavity, and one of the men let out a terrified oath.

But as fantastic as the description of this creature was, Marillier goes further to create a personality, an entity, with complex patterns of behavior.

The river being spoke, its voice a thundering torrent of sound in which I sensed rather than heard words. “Wash, dip, splash, drown?”
Tali glanced at the eldritch creature, then quickly away. “Tell it not yet,” she said. “Not till they’ve answered some questions.”
“Wait, please,” I said, my teeth chattering . . .

Tali and Neryn get what information they can from the men, using River Creature to encourage when necessary. When they’ve learned everything of use, Neryn must decide what to do with them, and the ever helpful River Creature is happy to provide more options:

The river being held still, keeping the two suspended. So far as I could tell, it was looking at me. “Plunge, toss, drown, change?” it inquired

Coolest flippin’ Fae creature I’ve encountered in recent memory. And while this one is my favorite, it is only one of many.

And then there’s the whole star-crossed lovers thing. You already know that I LOVE Flint. Well . . . so does Neryn. But they can’t be together, b/c . . . they just can’t. Not telling. But their love is so pure and so sweet and so absolutely delicious, that you can’t be upset about the lack of Flint in this installment, b/c the LONGING has taken hold of you, and you refuse to let it go. You cling to it, roll around in it, braid it into your hair and dance with it, and threaten anything that challenges it with torches and pitchforks.

Almost as fantastic as the LONGING, is the insight we get into Tali (I knew it, I KNEW IT).

When Neryn encounters the warrior ghosts for the second time, Tali is with her. Tali, being a warrior, herself, is of course going to be affected by the meeting. But it’s more than that, and, no, I can’t tell you why, just trust me—it is.

I did, however, have a couple of small issues. That thing that I knew about Tali? I’m pretty sure you’d figure it out too. It was kind of obvious in that the-lady-doth-protest-too-much way, but not only did Neryn not figure it out, she consciously states that she had no clue. None whatsoever.

My second (and bigger) issue, is that a fairly important character was killed off page. I hate that.

1. there’s no resolution, and

I don’t care if someone saw his head on a pike, if I don’t know, irrefutably, that a character is dead, I can’t let go. I keep expecting it to be a mistake, a misunderstanding, a LIE, and they’re going to turn up again any page now.

But overall, RAVEN FLIGHT was an excellent book. So excellent that I have no qualms about making many friends and family members suffer through the first less-than-stellar installment to get to this one. If you still aren’t completely sold, have no fear—THE CALLER, the final installment of this trilogy will be available September 9. I’m off to read it right now, and I’ll be back to let you know how it goes. Count on it.