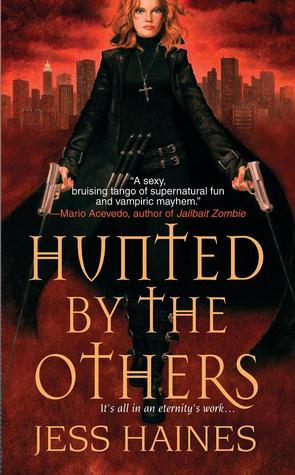 They are the Others--the vampires, mages, and werewolves once thought to exist only in our imaginations. Now they're stepping out of the shadows, and nothing in our world will ever be the same again. . .

In A Town Like This, Being A P.I. Can Be Murder

Shiarra Waynest's detective work was dangerous enough when her client base was strictly mortal. But ailing finances have forced her to accept a lucrative case that could save her firm--if it doesn't kill her first. Shiarra has signed on to work for a high-level mage to recover an ancient artifact owned by one of New York's most powerful vampires.

As soon as Shiarra meets sexy, mesmerizing vamp Alec Royce, she knows her assignment is even more complicated than she thought. With a clandestine anti-Other group trying to recruit her, and magi being eliminated, Shiarra needs back-up and enlists her ex-boyfriend--a werewolf whose non-furry form is disarmingly appealing--and a nerdy mage with surprising talents. But it may not be enough. In a city where the undead roam, magic rules, and even the Others aren't always what they seem, Shiarra has just become the secret weapon in a battle between good and evil--whether she likes it or not. . .


Several of my favourite Urban Fantasy series’ wrapped-up earlier this year which means that I finally have time to add a new one to my reading rotation, and Jess Haines’ H&W INVESTIGATIONS was next in line. I wasn’t quite sure what to expect when I picked up book 1, because reviews have been fairly mixed, but as far as first impressions go—I liked it! The author’s writing style flowed well, the pacing was excellent, and the story wasn’t weighed down by the dreaded information dump. In HUNTED BY THE OTHERS, readers get to witness the making of a vampire hunter, and I personally really enjoyed Haines’ introduction to her characters and paranormal universe.

Heavy world-building is usually a given in a first installment, so I was pleasantly surprised by how the author handled this aspect of her story. New terminology, magical rules, and artifacts are explored, but I didn’t find any of these aspects overwhelming at all. I especially enjoyed the inclusion of the latter because they helped give the heroine the tools she needed to tackle the big bad by shortening Shiarra’s learning curve which in turn led to more action, and less bumbling about. I liked learning about The Circle, White Hats, vampires and werewolves, and I thought that the mandatory Other contracts whenever humans were involved added an interesting safety net for the weaker mortals.

Shiarra finds herself in quite the conundrum when all facets of the Others start vying for her attention because of her latest assignment, and I was shocked by the sheer magnitude of character growth that she underwent in only one book. Waynest begins this story as a terrified P.I. flat out refusing to even consider taking a non-human case, only to end up just only in the thick of things, but actually fairing surprisingly well, although having a werewolf pack at her back, and a geeky sidekick certainly helped. Sara, Royce, Arthur, and Chaz were easy to like, and how can you not love a mouse named Bob? I found that some of Haines’ name choices left something to be desired, but I’m sure that they will grow on me in time.

The plot was entertaining, and I’ll be curious to see how Shiarra’s relationship with Alec plays out in future installments. There wasn’t much romance in this novel, but by the end pretty much all of the characters were paired off, so I can only assume that there will be some steam later down the line. The only thing that kind of bugged me were all of the lesbian jokes—now, I’m all for same sex couples in fiction, and the protagonist is obviously hetero, so why the jabs? They just felt unnecessary, and I’m sure that some readers might even take offense. I did however like how this book’s story arc was resolved because I 100% agreed with Waynest’s solution; it demonstrated both fortitude, and good judgement on her part.

HUNTED BY THE OTHERS went down easy, and left me itching for more. Next please!

54 responses to “Review: Hunted by the Others by Jess Haines”