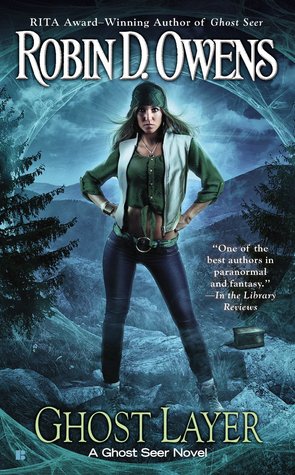 Clare Cermak’s adjusting to a new man in her life—and a lot of ghosts. The passing of Clare’s aunt gave way to a sizeable inheritance of not only money, but also the ability to communicate with the dead. At the same time, she met Zach Slade, a private detective with a rough past, and just like Clare, he’s not yet ready to accept her gift—or his own.

But Clare has another matter to look into. A multimillionaire needs her help after relocating an old ghost town to his mountain estate. The bones of a murdered prospector are making nightly appearances in his guests’ beds. When the gold miner’s ghost contacts Clare, she promises to help find the name of his killer—but someone doesn't want the past revealed and might find her first…

I know it’s only September, but I am beyond confident when I say that GHOST LAYER was my least favourite novel of 2014, and here’s why. Clare is an incredibly dense heroine; she doesn’t learn from her mistakes, and consistently made really poor judgement calls throughout this book. The author also used a ridiculous amount of caps to basically point out key elements to readers which I found beyond insulting. The romantic elements didn’t jive at all either. The mystery itself wasn’t horrible, albeit very predictable; the only good aspect of the whole story was Enzo, the ghost dog, but even then, it was unfortunate that nearly his entire dialogue was written in capital letters. I wasn’t sold on this series after the first installment, but decided to give 2 a try because I believe in second chances. Fool me once, shame on you; fool me twice, shame on ME!

Owens delved a bit deeper into her GHOST SEER lore by elaborating on the different types of spooks, what causes them to Go Bad, and the reasons why they don’t always move on. Some additional background is also given on Clare’s family tree such as the specifics of her ancestress’ deal with the Other, and some weird perks like getting a heads up when their deaths are imminent. The story itself was decently constructed, and I like how there’s always some truth to these books; in this case it was that the town of Curly Wolf was based on a real place—Buckskin Joe which is near Alma, Colorado. There were two main plot threads in this installment that ran alongside each other, and although I did enjoy the extra intrigue, I was able to pinpoint who the villain was very early on. The author brought in a couple of secondary characters in an attempt to make the list of suspects longer, but I wasn’t fooled.

My main issue was with Clare (obviously!); she had absolutely zero redeeming quality in my opinion. I can deal with weak heroines who are coming into their powers, but not stupid ones. Her unwillingness to accept her gift really rubbed me the wrong way. I get that she’s in denial, however, when you’re told that you must either accept your abilities or risk death or insanity, the stakes are just too high to ignore. Normally, I’m all for girl power, and hate it when the guy tries to ‘protect’ the protagonist, but in this case Zach is an ex-cop, and actually knows what he’s talking about. Someone is trying to kill Clare, so Slade advises her to stay in her room, and wear a bullet proof vest. Instead, she gets mad at him, completely disregards his warnings, and almost gets blown up by a car bomb. This heroine is seriously too stupid to live.

I really liked Zach as a character, but the more time he spent with Cermak, the more my opinion of him declined. He’s too smart to be falling in love with such an idiot! I struggled a great deal with the romantic aspects of this story because even though there’s LOTS of sex, their relationship was severely lacking in the chemistry department. Plus, Clare kept getting mad at Slade for refusing to reveal ALL of his secrets, yet they have only been dating for a couple of weeks. I found that this couple was horribly unbalanced, and felt sorry for Zach because he was like an abused dog that keeps coming back to his owner hoping to finally do right by them even though the situation is beyond hopeless. And, speaking of canines, I loved Enzo, but Robin D. Owens needs to learn how to use italics for emphasis, and understand the importance of showing vs. telling.

The cons of GHOST LAYER far outweighed its pros which is why I will not be continuing this series. Maybe there are readers out there who enjoy this author’s writing style, but it is definitely not for me.


Was this review helpful? If so, please consider voting for it on Amazon!