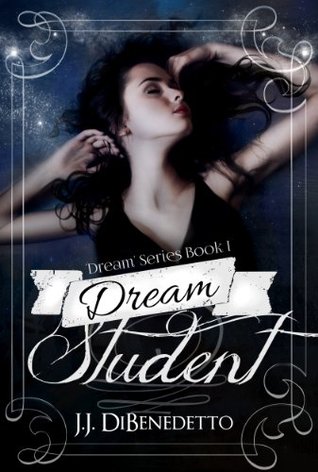 College junior Sara Barnes thought her life was totally under control. All she had to worry about was her final exams, Christmas shopping, applying to medical school – and what to do about the cute freshman in the next dorm with a crush on her. Everything was going according to plan, until the night she started seeing other people’s dreams.

It’s bad enough that Sara is learning more than she ever needed to know about her friends and classmates, watching their most secret fantasies whether she wants to or not. Much worse are the other dreams, the ones she sees nearly every night, featuring a strange, terrifying man who commits unspeakable crimes. Now Sara wonders if she’s the only witness to a serial killer – and the only one who knows when and where he’s going to strike next.

Dream Student is the first book of the Dream Series.

My reading this book, was a direct result of my avoiding reading something from my huge TBR pile. I received it from one of the freebie book sites that I get daily emails from, just this week. This book combined my love of the supernatural, with a serial killer read, also a favorite of mine.

Sara is twenty one, and a premed student at a Cleveland college. The year is 1989. She lives with her best friend, Beth, in a dorm. Out of the blue, she dreams about a young man that she doesn’t know, and he in turn, dreams about her-at the same time. While he is dreaming about her, they are aware of each other, as if it was really happening. One night, while out with her friends, she actually sees the man from her dreams, and they both know each other. And they immediately fall for each other-insta-love, and all that. At that point, Brian becomes a main character, along with Sara and Beth. It’s not long before Sara dreams of another man, one that is murdering young girls. Not only is she seeing it, but actually feels like she is in the room, while it is happening.

This is told in the first person of Sara for the most part, but the dreams are told in the 3rd person. That was really different for me. It worked because I wasn’t confused, but at first it took a bit to get used to. The character of Sara was smart, pretty, and although she goes after Brian when she first sees him, that’s not the type of person she normally is-an introvert. Brian is two years younger than Sara, and only a freshman. He is already smitten with Sara before he meets her, so he is more then willing to get involved with her. Beth is the beautiful one, but she is a great best friend, and sidekick for Sara. Both Sara and Beth, are pretty fully realized by the author, but at the end of the book, I still didn’t feel like I knew Brian that well. He’s just a nice young guy, with a controlling mother, and other then that, I kept waiting for more from him. He does have his sweet moments with Sara, of course, but I just wanted more from him.

Nightmares happen throughout this book, and actually carry over into real life, courtesy of a serial killer. When Sara realizes who the killer is, there is a lot of back story to explain the whys, and that was a good thing. However, I knew who the killer was very early on in the story. I really don’t like figuring things out that early. Another aspect I wasn’t a fan of, was the insta-love thing. I know it is used a lot in books, but I think that part could have been done a bit better. I also, would really like to better understand why no one bothers to go to the police? At times, I just wanted to yell at the characters to do so!

This book reads as young adult at times, but due to sexual situations, is actually an adult read-although nothing too specific. At times, it was a bit slow, and I think it could have benefited from some more of the serial killer, or paranormal aspects. However, that being said, I actually,for the most part, enjoyed the story. The use of the year 1989, was kind of fun, as it pointed out how we used to live without cell phones, or decent computers. It is part one of eight books, but I am not sure yet, if I will be continuing on with it-which brings me back full circle to my huge TBR pile, for my reason not to continue. If you enjoy psychic mysteries, that take place at college, this could be a good read for you.