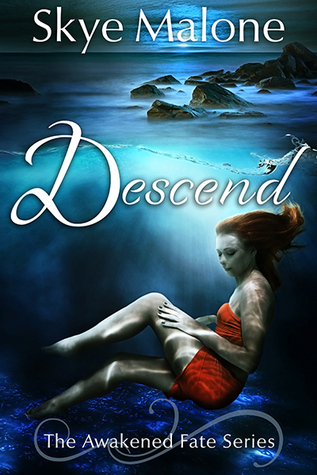 Chloe always dreamed of visiting the ocean, and now the ocean is the only place she has left to go. Trapped in the form of a mermaid and on the run from the Sylphaen, her best chance for safety lies in traveling with Zeke to his underwater home and staying under his protection there.

Leaving isn't easy, however. Her best friend doesn't know where she's gone, and her family doesn't either. She's been forced to abandon Noah, the boy she's liked for years and who she's just discovered likes her too. She only hopes Zeke's people will help her so she can return soon.

But when conspiracies follow her and people start to die, safety becomes harder to find than ever. The Sylphaen are coming. They're more powerful than she could have imagined.

And they're not through with Chloe yet

Recently I read(and reviewed) Awaken, the first in this series, and really liked it. When I realized the second book was out, I snapped it up and read it soon after. It’s young adult and it has to be said, it’s about Mer-people, only they are known as Dehaians. And so far, it’s the only mermaid series that I have ever liked.

The story starts when the last book ends. Chloe is in the ocean with Dahaian’s, Zeke, and his brother Niall and they are on their way to the Dahaian city, where the rest of Zeke’s family lives. She has changed to her mermaid form for the first time, after being drugged, and the only thing that will help her, is the physicians in Nyciena. Of course the journey is fraught with danger, but actually it gets even worse once in Nyciena.

This time around, the story is told from Chloe’s, Zeke’s, and Chloe’s crush, Noah’s perspectives. It was kinda nice getting everyone’s point of view, Noah’s especially, since he isn’t a Dahaian, so we get more information about Noah’s family, and about what Noah really is. Turns out, Noah and his brother are the nicest members of his extended family. His extended family-uncle and cousins, are just some of the villains this time around, although that was just a small part of the book.

While the previous book took place mainly on land, this time around, most of it takes place in the ocean. The author’s view of life in the ocean for the Dahaian was pretty fascinating. Over and above the huge walled city of Nyciena, the ocean itself is full of all sorts of bad elements. The Dahaian’s aren’t the only intelligent creatures in the ocean, and war seems pretty imminent. Chloe is right in the middle of a major power struggle, and things don’t exactly go well for her.

I remember saying in the last review, that I wanted more of the under the ocean story with book one, but now with this one, I missed having a bit more of the story take place on land. I think I wanted to see more of Noah and Chloe’s romance. So in that respect, I think I liked the first book a bit better, and I think if the story was mostly going to happen under the ocean, then more of it should have happened at the city. It just seemed like it was mostly traveling in the ocean, and fighting off bad guys, although a lot of that was pretty exciting.

I did enjoy the magic in the story, the ways the Dahaian’s utilize things in the ocean, and of course the description of the city. I do really like Zeke’s character, but I am hoping that we get more of Noah next time around, because he and Chloe’s friendship/romance was a big part of what drew me into the story in the first place. I also thought the cliffhanger ending was a bit too abrupt this time around. There really is something to be said about series books with no real cliffhangers, and I know from other authors that it really can be done.

If you have read the first book, you really need to read this one. It was full of dangerous situations, Dahaian politics, betrayals, and an interestingly described under the ocean world. If you haven’t read the first one, you really should before reading this one, as it is not a stand alone. All in all, a pretty good read!