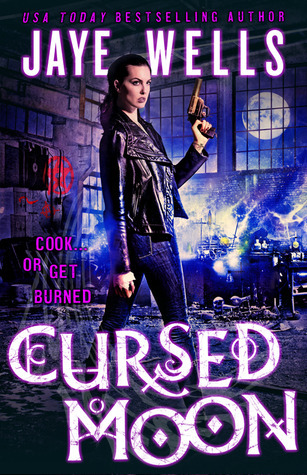 When a rare Blue Moon upsets the magical balance in the city, Detective Kate Prospero and her Magical Enforcement colleagues pitch in to help Babylon PD keep the peace. Between potions going haywire and everyone's emotions running high, every cop in the city is on edge. But the moon's impact is especially strong for Kate who's wrestling with guilt over falling off the magic wagon.After a rogue wizard steals dangerous potions from the local covens, Kate worries their suspect is building a dirty magic bomb. Her team must find the anarchist rogue before the covens catch him, and make sure they defuse the bomb before the Blue Moon deadline. Failure is never an option, but success will require Kate to come clean about her secrets.

I mentioned in my review of Dirty Magic that I wasn’t a HUGE fan of Wells’ Sabina Kane series b/c CRASS, but that The Prospero’s War was off to a much more promising start . . .

It’s been too long since I’ve read about Sabina, so I can’t remember if I found myself in the same situation that I am now, but I really feel torn. On the one hand, there is some AMAZINGLY insightful writing here, but on the other hand . . .

Call me a priss if you want, and you might even be right, but I have no desire to read things like:

I blinked. “That’s a mouthful.”

“Aye, lass.” He motioned toward his crotch. “I’ll give ye a mouthful.”

Just ugh. ALSO—I really HATE the word “crotch.” HATE it. That’s just a peeve of mine, can’t help it, and the word “crotch” is used NINE TIMES in the book. A couple of times it was used in reference to something nonsexual, but mostly it was someone’s face in someone else’s crotch, with other accompanying words like “drool” and “wetness” that “glistened” and just GROSS MAN. The fact that one of the times it was used was when Kate had a flashback of walking in on her prostitute mother getting head from one of her johns, when Kate was a CHILD no less, only makes it worse.

And it was that kind of thing that pushed me over the edge.

Honestly there was really no way this installment could have gone well for me. The whole situation was one that pushes my peeve buttons . . . I’m not crazy about premises that are based on the loss of control—if some girl gets slipped a date rape drug and wakes up with no memory of the last 8 or 10 hours, it’s not going to be a hit with me.

Even less of a winner when the Bad Guy is determined to unleash a sexual aggression (RAPE) potion bomb in Chicago on the night of the blue moon, b/c lots-o-magic means bigger detonation area, and hey, just for fun, let’s have a few test runs beforehand to keep the cops on their toes. Test runs like drugging a few sorority houses so the girls run around Sorority Row ganging up on any male who is unlucky enough to be around, and ass-raping them.

This isn’t a spoiler, but the text is so graphic, that I’m not comfortable posting it without giving you fair warning. My main issue with this book wasn’t the lowbrow humor, it was this:

View Spoiler »The first grouping I met up with was a pair of girls—one blonde and one redhead—who were using a sex toy to violate a boy who couldn’t have been older than nineteen. Judging by the tears rolling down his face, he wasn’t enjoying the ministrations. “Back away, ladies!” I said in my command voice.
The blonde looked up but kept her hands busy on the boy’s shaft. She smiled and licked her lips. “Ooh look, Rachel, a lady cop.”
The redhead pushed the sex toy deeper, eliciting a pained groan from the kid. “You can sit on his face.”
I raised the S&P canister. “Stand down or I’ll spray you with sodium capsicum spray.”
The redhead laughed, a deep, throaty sound. Then she slowly pulled the phallus back out before slamming it home again.

That’s just totally uncalled for. There are about a BILLION ways to communicate that scenario without being so completely horrific. Not that I’d be okay with it happening under any circumstances, but I could get passed it if it wasn’t shoved in my face in such an unignorable way. Maybe that’s the point. I don’t know. Don’t really care either—I don’t like it.

BUT . . . as awful as that was . . . it was only a small portion of the book. And so in true Jessica fashion, I was able to push through, refusing to dwell on it, so that 50 pages later, I barely recalled it at all, beyond a vague sense of discomfort. It wasn’t until I started going through my highlights that I really thought about it, and yes, that was the worst of it, but I’m not going to lie . . . the overall feel of this story is one where things like that are possible. There’s a kind of postmodern, in your face, life-sucks-and-then-you-die-so-deal-with-the-wretched-reality-of-your-existence cloud that hovers over this whole book.

Some people really like that. And if the context in this situation hadn’t been sexual violation, I could have handled it. Stacia Kane’s Downside Ghosts is never going to be one of my Top 5 UF Series, but I like it. I’ve heard Chuck Wendig’s Miriam Black series is supremely dark and gritty too, so there’s definitely a market for this kind of book . . . I’m just not the target demographic.

But there were other problems as well.

It really annoyed me that Kate viewed herself as an addict and refused to use magic (despite her super, special snowflakeness in that area), but had no issue whatsoever with drinking her troubles away. FREQUENTLY. It struck me as very inconsistent with the kind of personality/determination that goes hand-in-hand with having the strength and willpower to not use magic for nearly 10 years.

Her obstinate refusal to use magic annoyed me even more. Actually, obstinate doesn’t begin to cover it. Is there a word that means remaining obstinate despite irrefutable evidence that you are WRONG? I looked and couldn’t find one. Someone needs to get on that, and whatever word they come up with—that’s what Kate is. She FINALLY has her Aha! moment near the end of the book, but by that point I was so over her nonsense that it barely registered.

And Pen. What was up with her? Kate’s awesomely awesome, understanding and wise bff suddenly morphs into super bitch for 90% of the book, and then just as inexplicably reverts back to her usual self?

So yeah . . . this book was flawed. But despite evidence to the contrary, I didn’t hate it. As I mentioned earlier, Wells is incredibly insightful in some of her observations, and when I wasn’t put off by the teenage boy non-humor, there was lots-o-funny times as well. I have higher hopes for the next book, b/c Kate finally seems to have stopped fighting the useless battle to not use her gift, and given that my graphic sexual violence issues were a result of this book’s plotline, I’m hopeful that it isn’t going to be a recurring theme. HOWEVER . . . if it is, then I am OUT.

I’d recommend this book to people who like darker and grittier UF series and who aren’t sensitive to sexual assault.