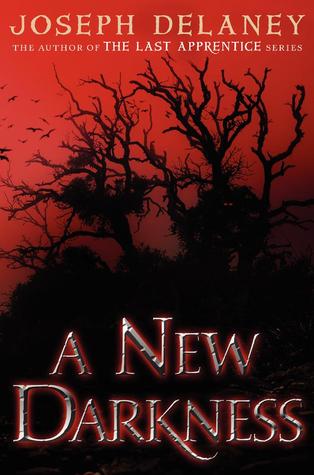 A chilling new trilogy from the author of the internationally bestselling The Last Apprentice series! Tom Ward is an apprentice no longer—now he is a fully fledged spook battling boggarts, witches, and other creatures of the dark. This three-book arc will introduce brand-new readers to Joseph Delaney’s haunting world, and delight longtime fans.Tom Ward is the spook, the one person who can defend the county from ghosts, ghasts, boggarts, witches, and other bloodthirsty creatures of the dark. But he’s only seventeen, and his apprenticeship was cut short when his master died in battle. No one trusts Tom’s skill, not till he’s proven himself. And a fifteen-year-old girl named Jenny knows more about the three mysterious deaths in the county than Tom does. She is a seventh daughter of a seventh daughter and she wants to be Tom’s first apprentice—even though a female spook is unheard of. Together, Tom and Jenny will uncover the grave danger heading straight toward the county, and they’ll team up with a witch assassin to confront it.A New Darkness begins a three-book series that will introduce new readers to Joseph Delaney’s deliciously scary imagination and delight his longtime fans. A New Darkness is perfect for every reader who loves thrills, chills, action, and adventure-no prior knowledge of the Last Apprentice series necessary! The Last Apprentice series, the first internationally bestselling series about Tom Ward, is soon to be a major motion picture, Seventh Son, starring Jeff Bridges, Ben Barnes, Alicia Vikander, Kit Harington, Olivia Williams, Antje Traue, Djimon Hounsou, and Julianne Moore as Mother Malkin.

When I saw this book available for review, I leapt at it. I’ve been meaning to start Delaney’s The Last Apprentice series forever, but was, once again, daunted by the number of installments (13, not including the various bonus stories).

In A New Darkness, I thought I’d found the perfect solution—I’d get to see what all the Delaney fuss was about without having to commit to another long-running series.

I was so very, very wrong.

I know I don’t pay enough attention to blurbs. It’s a problem, and I own it. But this time . . . this time, I’m almost positive that I did read it, b/c I specifically didn’t want to request A New Darkness if it was a continuation of the previous series (b/c OCD).

Whatever. The current, just-before-publication blurb, clearly states that it is, in fact,  a continuation, but that no prior knowledge is necessary to read and understand this book. And maybe that’s true . . . I’m not sure if what I was feeling while I was reading this was confusion or frustration, b/c whether I needed to have read The Last Apprentice was kind of irrelevant to me . . . b/c I wanted to have read it.

Half of the book was throwbacks/mentions/this-one-times from the other series, and while we were given enough information for it to make sense, it was painfully obvious that there was more going on that was flying right over our heads.

I felt ignorant the entire time I was reading this book.

So that was a problem. Another problem was that I felt like I was reading an historical accounting of the events in the book . . . but in realtime? Which was strange . . . but the feeling made more sense when right before the first POV change, a point was made by the character that they were writing everything down in a journal.

But while, in theory, reading someone’s journal may sound highly entertaining and full of juicy tidbits, in reality . . . unless you know the person incredibly well (your sister, your girlfriend, etc.) . . . it’s really not.

As for the characters, not only did I feel like I didn’t know them very well, but I didn’t particularly like them either. I’m guessing that Tom Ward is the last apprentice, and Grimalkin seems like an immensely interesting character, but yeah . . . in this one book . . . not enough development to make a lasting impression. And without context, Grimalkin just comes across as the scheming, manipulative witch that Jenny fears she is. Jenny . . . I initially liked her, but as the story progressed, she became more and more judgmental, and more and more surly. She badgered Tom into taking her on as his apprentice, but then she does nothing but second guess him, and complain about his instruction.

And the new enemy . . . this is a personal peeve of mine, so it probably won’t bother you unless you share my peeve, but I’ve never been a big fan of humanized animals as characters.

And it probably has something to do with going to see Guardians of the Galaxy a couple of weeks ago, but when this “new darkness” was on the page, all I could see in my head was an evil version of Rocket. I think the Kobalos are supposed to be more wolf or fox-like, but yeah . . . Rocket. *shrugs* Even if I could force myself to see beyond that, I’d still be seeing something pretty awful: 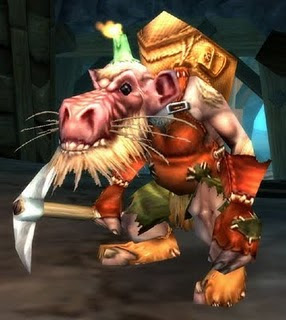 Any WoW players out there? Say hello to your friendly neighborhood kobold. *shudders*

And don’t even get me started on that cliffhanger. I wasn’t even that invested in the story, and I wanted to throttle someone.

So yeah . . . if you’re a longtime fan of the series, I’m sure A New Darkness is an excellent addition to your well-loved world. But if you’re thinking of using this book to take the easy road to exploring the widespread fascination with Joseph Delaney . . . you might want to think again.

31 responses to “Review: A New Darkness by Joseph Delaney”