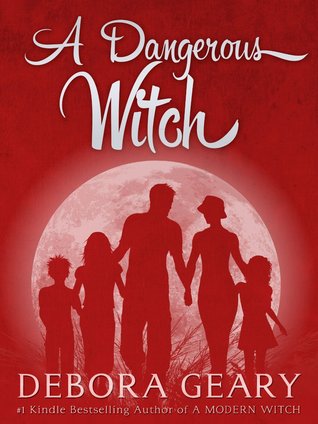 It's the end of an era. This is the final release in the world of A Modern Witch. If you haven't met my witches yet, this is not the book you want to read :). Go find A Modern Witch and begin where it all started.

I figure the final book doesn't need much introduction. Take one last journey with your favorite witches as an oversized marble calls another member of Witch Central on a journey...

Forget everything you have read about witches before, because the witches in this series are probably not what you are used to, unless of course you already have read these books. I certainly have-all of them. And I have absolutely loved all of them. It was a shock to learn that this is the last of the witches of Witch Central we will ever read about, and I will miss them.

Most of these books revolve around the Sullivan and Walker families, their extended family, and friends. For the most part, they are all witches, with all different kinds of magic. Water witches, fire witches, earth witches, they are all represented, but with this story another sort of witch, finds her magic, and it isn’t good.

Nell and Daniel Walker are the parents of five children, which include a set of eleven year old, triplett girls. Ginia found her magic early, she’s an extraordinary healer. Shay has no magic, but she has her own great attributes. Up until now, Mia showed no signs of any magic, so when she suddenly exhibits signs of fire magic, all the fire witches are ready to start training her. What they don’t know, is that Mia is evolving into something that hasn’t been seen in over five hundred years, and it’s scary to say the least.

The best word to describe these books is heartwarming. Charming works too. They are always fast, well written reads, and feature a different witch in each book. The witch is usually facing some sort of problem, or just finding their particular magic. By this point, I feel like I know them all, and care about them all. Meeting their significant others, falling in love, having babies, this is how these witches live. There is so much love in these books, whether between a couple, parents, and their children, cousins, well you get the idea. It’s all held together by an old Irish witch named, Moira, the family matriarch. She lives in a small fishing village on the coast of Nova Scotia, where parts of these stories take place. It also takes place in California, and since the witches can port themselves to wherever they want to go, it totally works.

This book was shorter then the others,except the novellas. The author went through a personal crisis, and is unable to finish with the series. She took pains to try and wrap it all up in an epilogue, and I did enjoy the glimpses in the future that we get. I do regret not getting Aervyn’s grown up story-that’s the one I really wanted. Aervyn, also one of Nell and Daniel’s children, will grow up to be the most powerful witch that has ever lived(not a spoiler), and even at the age of four, surpassed all the adults. He, and Lizard, a female witch, and former delinquent, were my favorite characters of the series, and thankfully we did get Lizard’s grown up story, in a previous book. There is so much more to these stories, I could go on and on, like that there’s a magical realm game on the internet, run by witches, and mainly for witches, or that there’s always someone learning a life lesson, but there is just not enough room to tell it all. Suffice it to say, these are witches getting their happy ever after, and all they go through to get it-surrounded by love and magic, at every turn.

All of these books for the most part, top the Amazon charts when they are released, and if the reviews are any indication, are very beloved by all that read them. They certainly were to me. As I write this, eight of these books are listed in the top twenty fantasy reads on Amazon-including the top two spots. If it was me, I would start with A Modern Witch, the first book in the three series featuring these witches. I recommend them to ages 14 up.

12 responses to “Review: A Dangerous Witch by Debora Geary”