When I told my girlfriend that I had agreed to write about why I prefer action to romance in fiction, she was very supportive: “WTF?!? NO! How can you do that?” So in the interests of sanity and moderation – or at least the pretense of them – let me just say right now that I like both. I live in a small mountain town in Southwest Virginia (where we don’t have much action OR romance) and at least once a year I get snowed in for a couple of days. When that happens, I get out the cider and the kettle corn, bundle up under a blanket and watch Love Actually along with more traditional Christmas movies like Die Hard. But the truth is, my idea of the perfect date movie is Speed. Two likable leads, Keanu Reeves and Sandra Bullock, come to respect each other while a homicidal madman does his best to blow them up for money and fun. They’re smart, strong, good, capable people who lean on each other, learn about each other, and fall in love or something like it amid explosions and high speed decapitations. What could be more romantic than that?


When Push Comes to Love
by Elliott James
Once Upon a Time, the thing calling himself Liam Summers let himself into Samantha Hale’s tower (or at least her eighteenth floor apartment). He was short and slender, smoothly muscled in skinny jeans and a form fitting maroon shirt of some expensive looking material. His bright sea green eyes were framed by wavy brown hair and sharp cheekbones, and he smelled of rich pipe tobacco.
“Samantha?” Liam’s voice dripped velvet. His hearing was as sharp as mine and his vision better, but a radio was playing in the background while I waited around a corner. He closed the door, walked in, and saw me straddling a wooden chair backwards.
“Samantha’s in the hospital.” I told him, holding up her cell phone. “And she never got that money from her grandmother for you either. I wrote that text.”
He finally smelled me and wrinkled his nose. “What is this?”
“Samantha threw herself off a bridge,” I explained. “I saw it and jumped after her, but hitting the water gave her a concussion. When I found her purse, I smelled your elf stink all over it.”
Well, half-elf stink technically. The Fae left our world centuries ago. They’d made a kind of mutual and magical non-aggression pact with the earth, and most natural elements wouldn’t harm them. Then mankind began synthesizing elements into new alloys and chemical agents. The Fae’s wards couldn’t recognize all of these new combinations of old elements fast enough to shield against them effectively, so the Fae did what tourists always do when a vacation spot becomes dangerous; they packed their bags and went home. But they left all kinds of half-breed bastards behind.
This particular bastard smiled naughtily. “You stole her keys.”
“I borrowed them.” I held up a small journal. “I’ve been sitting here reading Samantha’s diary.”
Those rose petal lips twisted. How many women had wanted to soften that cruel mouth with kisses? “Her diary?”
“You’ve been careless, Liam. You really should have bothered to know her,” I said. “Samantha writes beautifully. Or at least she did before she met you. Then her entries become increasingly obsessive and repetitive.”
His mouth tightened angrily. “Why is this your concern?”
I ignored the question. The answer…that my name is John Charming…that I come from a long line of monster hunters and have fallen under a curse that can’t be lifted by any kiss… is too complicated. “Think of me as her fairy godfather. The kind of godfather who breaks legs and doesn’t like disrespect. And you’re a gancanagh, right?”
He laughed disbelievingly. “What does some werewolf mutt know about gancanaghs?”
“I know you’re love pushers,” I growled. “You turn women into addicts. You use your magic to make them love you. You isolate them from their friends and family. You take their money, their pride, their strength. And when there’s nothing left to take, you leave them, and they die.”
“All humans die,” he scoffed. “I gave Samantha everything she wanted. Mystery. Danger. Sex. A little taste of wickedness. She has a thing for the bad boys, you see.”
“The last thing Samantha wrote before she tried to kill herself was that she wished you would love her,” I observed. “And that you would suffer from it the same way she’s suffered.”
“Poor Samantha,” he smirked. “Such a romantic.”
I regarded him steadily. There was only one way to break a gancanagh’s spell, and we both knew it. “Your kind like riddles, right? Tell me something, Liam. What happens when a bad boy meets a dangerous man?”
Inhumanly quick, he whipped a silver knife at me. I’d had my hands draped over the back of the chair while I sat in it reversed, and I slid off, tilted the chair, and lifted the seat in a crude shield. The knife went halfway through the wood and stopped.
He tried to kick through the chair, but I rotated it and caught his foot between the leg supports instead, then kept twisting. The wood broke before his knee did, but he was hopping awkwardly when I rose up with a backhand that sent him reeling, nothing but his uncanny grace keeping him upright. I charged him then, him and the patio window that I’d purposefully left open, and the industrial asphalt far below.
I guess I’m not much of a fairy godfather. I couldn’t grant Samantha s wish; Liam never did love her.
But he did fall for her hard.

An army brat and gypsy scholar, ELLIOTT JAMES is currently living in the Blue Ridge mountains of southwest Virginia. An avid reader since the age of three (or that’s what his family swears anyhow), he has an abiding interest in mythology, martial arts, live music, hiking, and used bookstores. Irrationally convinced that cellphone technology was inserted into human culture by aliens who want to turn us into easily tracked herd beasts, Elliott has one anyhow but keeps it in a locked tinfoil covered box which he will sometimes sit and stare at mistrustfully for hours. Okay, that was a lie. Elliott lies a lot; in fact, he decided to become a writer so that he could get paid for it. 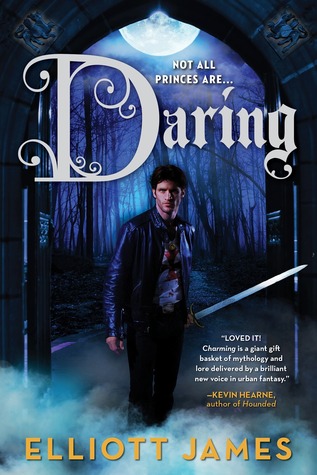 THE WEREWOLVES HAVE A NEW LEADER…AND HE CANNOT BE STOPPED.

Werewolf packs are being united and absorbed into an army of super soldiers by a mysterious figure who speaks like an angel and fights like a demon. And every Knight Templar—keepers of the magical peace between mankind and magickind—who tries to get close to this big bad wolf winds up dead. No knight can infiltrate a group whose members can smell a human from a mile away…no knight except one.

John Charming. Ex knight. Current werewolf. Hunted by the men who trained him, he now might be their only salvation. But animal instincts are rising up to claim John more powerfully than ever before, and he must decide if this new leader of wolves is a madman…or a messiah.

DARING is the second novel in an urban fantasy series which gives a new twist to the Prince Charming tale.


Visit The Book Nympho to read today’s ROMP post by Bec McMaster, then VOTE for your fav!