Before I get to the point of this post, I’ve got to admit I like to write and read a good romp almost as much as a good stomp. In fact, as I tend to write a bit of both in my (stomping) series, I’ve realized writing one is a lot like writing the other. Bodies might slam together, furniture can get broken, restraints and blindfolds aren’t unheard of, and everyone should end up sweaty.

But superficialities aside, here are three ways the two types of scenes should mirror each other.

Every Stomp Is As Unique As The People Involved

No two couples fall in love the same way, and therefore no two romantic scenes should unfold the same way. In that same vein, no two adversaries are going to fight the same way. Every action scene has to be different because every action scene reflects the personalities and goals of those involved, as well as the setting they’re in. In that way, each stomp scene is as intimate as each romp scene. After all, the most memorable battles are those that are lived through the characters, and a good stomp brings all the characters’ baggage with it. The scenes should show off their skills and weaknesses, their fears and their secrets. Moreover, they should reveal them in the most personal of ways.

Language Should be Evocative

A good romantic scene engages all the senses. It’s called being sensual for a reason, right? But just as the language of a good romp scene should evoke certain feelings, so should the language of a good stomping. In order for readers to feel what the characters feel, the language must be visceral. It should raise your blood pressure, make you hold your breath, and tremble your fingers. Only maybe it shouldn’t do that in so pleasurable a manner (unless you’re into that kind of thing, and then sure).

Stomps Must Have A Rhythm

Do I even need to mention why romp scenes need rhythm? Probably not. But action scenes need it too. They might start off explosively, but they should also build until an even more explosive end—literally or metaphorically. Or they might start slowly, increasing the tension and sense of dread. Sure, sometimes you might end up with a quickie because who has the energy for marathon-long fights all the time? But that rhythm should be expressed in the pacing, both at the sentence level and throughout the scene. Each sentence should push you to read the next faster and faster, so by the time you get to the end, you’re as breathless as the characters.

There you have it—three ways stomps, like romps, are both challenging and fun to write. But when all is said and done, why is stomp better than romp?

Because a good action scene can say more than any romance scene.

Sweet and sexy romance is nice and all, but nothing says “I love you” like being willing to risk life and limb in a no-holds-barred fight for someone else. At its heart, stomp is about passion. These are scenes (and books) about people putting it all on the line to save others, and I think that’s pretty damn hot.

Tracey Martin grew up outside of Philadelphia, the lucky recipient of a drama-free childhood, which is why she spent so much time reading about other people’s lives. It was while she was working on her doctorate in psychology that she had an epiphany–imaginary people are way more fun than real ones. And so she began writing. Never able to choose just one of anything, she currently writes both urban fantasy for adults and contemporary stories for teens.


She likes her coffee simple, her music epic, and her movies to contain explosions. A city girl at heart, she doesn’t understand how she and her husband ended up living in New Hampshire, but writing keeps her off the mean, small town streets. 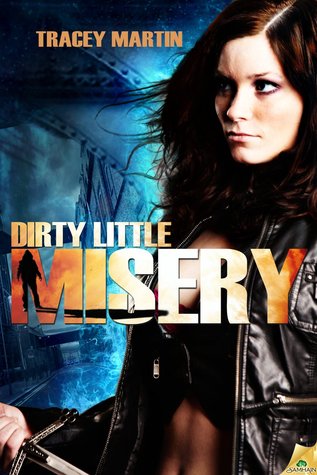 Lust can be downright lethal.

Thanks to her freakish, satyr-like power, Jessica Moore was denied her dream to join the Gryphons, the magical law-enforcement officers protecting humanity from the pred races. But after the Gryphons tried to arrest her for murders she didn’t commit, Jess is no longer interested. Too bad—they are.

Now that they know what she can do, they want Jess on their side. If she doesn’t agree to help them solve a new case, they’ll charge her with every magical crime she’s ever committed.

Nine people are dead. The cause? Exhaustion. The activity? Never-ending sex. Someone sold them tainted F, an illegal aphrodisiac made by satyrs. No surprise, Jess’s satyr allies aren’t pleased with her investigation. Worse, it strains her tenuous relationship with Lucen, the one satyr she counts as a friend.

As Jess delves into the shady satyr business world, she unravels a scheme more sinister than dirty drugs—and her relationship with Lucen unravels right along with it. Only the truth will save their friendship. But not before it turns Jess into an ambitious killer’s next target.

Warning: Contains blackmail, betrayal, and sex that’s literally to die for. Plus plenty of bad stiff jokes to go with it. Remember, just say no to magical drugs.


Visit The Book Nympho to read today’s ROMP post by Amanda J. Greene, then VOTE for your fav!