Hello Stompers and Rompers! I’m so happy to be here! Huge thanks to Carmel for inviting me!


Chemistry in a Fighting Partnership

I’m all about the stomp today. And my stomping is served up with a side of chemistry. You see, the heroine in my debut paranormal romance, Veiled Target, is an ass-kicking chick who packs heat and assassinates for a living. Much to Tess’s dismay, though, her next target turns out to be her hot-as-hell blind date. And when that date turns deadly and they’re forced to team up, let’s just say more than the action heats up. Here’s a peek…

“You’re not scared,” he said, running a hand through his hair.

“I don’t scare easily.” Why oh why did he have to stir something warm and hopeful inside her?

He took a few steps closer before reaching out and wiping a drop of perspiration from her forehead with the pad of his thumb. “Glad to hear it.”

She batted his hand away, terrified that she didn’t hate wolfen as much as she used to. “Keep your hands to your—”

He grabbed her around the waist and pulled her snug against his body. The contact sent tingles she should not be feeling straight to between her legs. Before she could protest—not that she really wanted to—he dropped them both to the floor.

Something smelling worse than a skunk-spray-cow-dung cocktail flew past their heads and landed with a splat on the wall behind them. Hugh’s arms cushioned their fall so her backside landed gently on the concrete floor. His rock hard body remained over hers and she tried not to think about her breasts pressed against his chest.

“These hands come in handy sometimes. You might want to remember that.” He jumped to his feet and extended one of those very fine hands to help her up.

She took it with secret gratitude. The instant she was vertical again, another stink bomb whizzed past them, sparing her from saying thank you. “What is that?”

“Poison to you, a pain in the ass to me. Let’s go.” He released her and ran in between the heavy-duty shelving units lining the warehouse.

She followed right on his heels. “I guess the Banoth found a way in.”

“Yeah, and it won’t stop until it sticks its fangs into one of us.”

“Us? I think it’s after you, big guy. I’m hardly the type to interest a big hairy beast like that. You must have ticked off its mother or something.” She felt a grin flank her face. Her juices were flowing, her body was pumped. Hands down, this was one of the best romps she’d had in a long time.

A piercing cry—like fingers scraping on chalkboard magnified times ten—echoed through the warehouse. The noise sent a chill over her lips and down the back of her legs, eliminating some of the excitement pumping through her veins.

“That doesn’t sound good,” she said as they turned down another aisle, this one darker and narrower.

Hugh slowed and then stopped, allowing a few seconds to pass before he spoke. “It means there’s more than one of them.”

“Don’t tell me they travel in pairs.”

“Okay. I won’t tell you.” He stood only inches away, his nearness good and bad. She could see the wheels turning in his head, and noticed he seemed to be assessing the situation like he was clairvoyant. Which he kind of was.

“So with these killer senses of yours, you can smell and hear him even though we can’t see him?” She relaxed against the shelf, glad for the chance to catch her breath, and really happy to be on an adventure.

Her mind spun when he hesitated to answer. She could tell from the look on his handsome face that he was more concerned for her than himself. The regard caused something to shift inside her, like a vine twisting its way through her veins, awakening nerve endings she’d shut off. But feelings were something she couldn’t afford. She had a job to do. And if she discovered information about Hugh that justified his elimination, she’d follow through. Her life depended on it.

***
So what makes a fighting partnership especially unique? I think it’s three things:

Authenticity—it’s hard to be something you’re not when you’re struggling to stay alive.
Courage—creative risks, grace, grit, fearlessness, all combine in an attractive package that ups the stakes.
Vulnerability—admitting two is better than one and allowing some emotion to show makes a stomping even more satisfying in the end.

USA Today Bestselling Author Robin Bielman lives in Southern California with her high school sweetheart husband, two sons, and crazy-cute mini Labradoodle, Harry. When not attached to her laptop, she can almost always be found with her nose in a book. She also likes to run, hike, eat cupcakes, and dip her toes in the ocean. Filled with wanderlust, she longs to visit many different places and fulfill her curiosity. She wouldn’t mind indulging her sweet tooth in every location either. She’s a lover of sticky notes, cable television shows and coffee drinks. Writing is a dream come true, and she still pinches herself to be sure it’s real.


She writes contemporary and paranormal romance and loves to connect with readers. Learn more and sign up for her newsletter on her website. She can also be found online here: 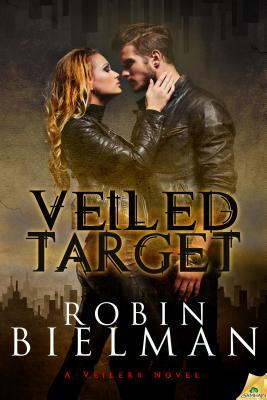 “Never take Fate along on a date. The kiss goodnight could be deadly. “

Tracking down Veilers-non humans-is only a sideline for Tess Damon. Vengeance for her fiance’s murder is her reason for living. But with two botched jobs on her record, if she fails to eliminate her next mark, she’s dead.

She’s not afraid to die, but not before she gets even. Too bad fate has a really bad sense of humor.

Hugh Langston, a wolfen half shifter, lives to keep both humans and his pack safe. But when rogue humans kidnap his apprentice, his rescue mission is compromised by a hot-as-hell, kick-ass woman who makes him think only one thing: “mine.”

Tess tries to ignore her feelings, but temptation trips her up. Especially when Hugh figures out he’s her next target and forces her into an inconvenient alliance that tests all the laws “against” their attraction.

Now, with the line between good and evil getting blurrier by the minute, it becomes clear Tess’s only hope of living to see another day-and finding a murderer-lies with the one man she’s supposed to kill.

Warning: Contains one obscenely hot alpha and the woman who wants to love him before she kills him. Look out for a blind date, scorching sex, humor, lies, and untamable attraction.


Visit The Book Nympho to read today’s ROMP post by Sara Humphreys, then VOTE for your fav!