Stomp or be Stomped!

Now, make no mistake—I love writing good sex scenes. They’re fun and spicy and all sorts of ooey-gooey goodness. Hell, one of my heroines has three husbands and yes, they romp together, all at the same time. Explicitly. I don’t close the bedroom door.

BUT…ya know, my books? More about the action scenes! Action is supercharged and a good adrenaline junkie just loves to put that energy to good use. A great heroine must be able to hold her own in a fight, as well as holding her partner in bed. I mean, just look at the covers I get—you can SEE what kind of characters I write. They aren’t about to cower away when it comes to standing their ground and saving the day.

I maintain that writing a great fight scene is even more complicated than writing a good sex scene. For one thing, in my books, the fights usually have a number of participants (well, so do some of my sex scenes, but I’m not doing the Romp part here). So there are more hands, arms, legs, and body parts to choreograph. For another—fights usually involve extremely heightened emotions, so there’s more than just a physical component going on, contrary to what some people would like to believe.

I agree that it’s damned hard to beat good sex, but let’s face it. We’ve all had those moments when we want to pound somebody into the ground. And what better way to take out your aggressions safely than either writing or reading a good bitch-slap, knock-down, drag-out fight? Where else can you grab somebody’s hair and toss them around the room? Or show off all that work you put in at the gym building muscle and toning your abs? Action scenes give you the freedom to express yourself in ways that—in real life—would get you thrown in jail or carted off to the hospital.

I mean, again—sex? Hot damn, thank you ma’am hit the floor and give me more…BUT…unless your character has one hell of a set of genitals, I don’t think her ladybits are capable of stopping a demon horde from breaking through into the world. And without the action-packed heroine there to save the day? Well, there won’t be any more great sex scenes if the demons break through and destroy the world. Therefore, by this line of reasoning, action scenes make it possible for great sex scenes to happen! (Just go with me here, okay?). And after the battle? All that sweaty adrenaline, THAT goes into the romping side of things.

So pick the STOMP side of the battle this time, because without our characters out there stomping on the enemy, there won’t be a safe world in which to get your romp on. 😉


Yasmine is a shamanic witch, and walks an eclectic path. She considers her life a blend of teacups and tattoos–the former in her china closet, the latter on her skin. She’s a theatre major, a graduate of the Evergreen State College (Olympia WA). She lives in the Seattle WA area with her husband and is the mother of four cats. 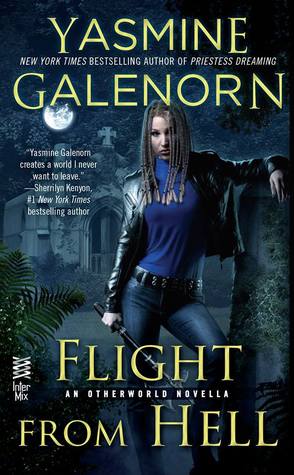 When the half-demon Carter approaches Menolly and her sisters desperately asking for their help, they think he’s just had a tiff with Shimmer, his blue dragon girlfriend.

But after talking to Alex Radcliffe, the owner of the Fly By Night Magical Investigations Agency where Shimmer works, they suspect that she has been kidnapped by an old enemy of Alex’s.

Now, Alex must join forces with the D’Artigo sisters in a desperate race to find Shimmer before Julian, a powerful vampire from Alex’s past with a grudge to settle, can use the dragon to wreak havoc on Seattle as revenge.

INCLUDES A PREVIEW OF THE OTHERWORLD NOVEL PRIESTESS DREAMING.


Visit The Book Nympho to read today’s ROMP post by Mandy Baxter, then VOTE for your fav!