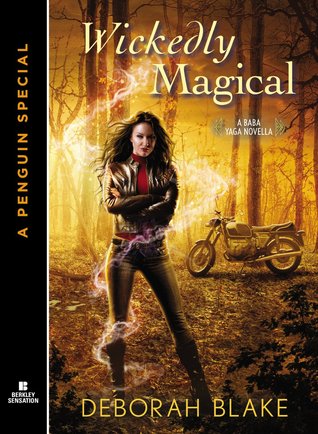 Known as the wicked witch of Russian fairy tales, Baba Yaga is not one woman, but rather a title carried by a chosen few. They keep the balance of nature and guard the borders of our world, but don’t make the mistake of crossing one…Barbara Yager loves being one of the most powerful witches in the world, but sometimes she’d rather kick back in her enchanted Airstream with a beer in her hand than work out how to grant the requests of the worthy few who seek her out.But when a man appears with the token of a family debt of honor, Barbara must drop everything to satisfy the promise owed by her predecessor—and she isn’t above being a little wicked to make sure the debt is paid in full…

I wasn’t going to review this on the blog, b/c it’s a novella, and I seldom have much to say about novellas. But then I started writing my review on Goodreads, and I discovered that this one was bad enough to be an exception.

I’m so very tired of getting excited about new UF series that have interesting blurbs and covers, only to get my hands on the actual book and have that hope destroyed.

It makes me angry.

“Hmm,” she said. “‘Curiouser and curiouser,’ to quote Alice.”
Chudo-Yudo looked up from gnawing on the remains of his bone. There wasn’t much left. “What?”
“It’s a quote from Alice in Wonderland,” Barbara said.

It wasn’t enough to unnecessarily add, “to quote Alice.”  NOPE. We’re much too dense to get the reference. Who cares that it’s one of the most often quoted lines in literary history? Not Deborah Blake. So just to make doubly sure her bibliophileness doesn’t get overlooked, she gave us the book title as well.

But why stop there?

“I know that,” the dragon said grumpily. “I’ve read my Lewis Carroll.”

Not only are we stupid, but we’re LAZY. We can’t be trusted to look up the author on our own.

Maybe I’m blowing this out of proportion, but I’m one of those readers who, when an author starts to capitalize things that aren’t usually capitalized like, “The Look,” or, “Big Deal,” and goes on to have the character say that he or she could FEEL, or almost HEAR the capital letters . . . that annoys the crap out of me. I’m perfectly capable of recognizing emphatic capital letters without being lead by the nose, thankyouverymuch.

That whole dialogue had a similar feel, but admittedly, that could just be me. Unfortunately, that was the least of my issues with this prequel.

There were the inconsistencies.

“I’m a very lucky woman,” Grace agreed, but she was gazing coyly up at Jonathan in a way that could turn him on in an instant.

Really? That’s the best you could do? Turn him on? In an instant??

Or how about this:

“Barbara!” Bella said sharply. “What is it?”
“I don’t exactly know,” Barbara said. Even to her own ears, her voice sounded far away and dreamy. “This isn’t like any other Call I’ve ever had. It’s . . . different. Stronger. As if I can hear Fate saying my name out loud, leading me to a path that will change everything.”
“Change it how?” Beka asked.
“I don’t know,” Barbara said in a quiet voice. “I only know that after this, nothing will ever be the same again.”

SO. . . this Call (<—–a kind of subliminal mental pull towards whatever problem needed her special attention) . . . It’s different ? Stronger? It will change everything ? Nothing  will ever be the same?

And don’t get me started on the oblique justifications of Bad Guy’s actions.  Dude stumbled across a magical artifact that allowed him to bend people to his will, and he used it to form a cult and create a harem: yes, he did a bad thing, but poor guy, he was raised in foster care, and only wanted a family. *bats eyelashes*

He convinces a lonely, old couple to sign their house over to him by taking advantage of their regret over not being able to have children.

Yeah, sorry .  . . the “product of his environment” argument has never worked on me. Not for adults.

So YEP, this was pretty terrible. If I wasn’t bored, I was irritated. If I wasn’t irritated, I was bored. The only reason I finished it was b/c NOVELLA. DNF-ing a novella just feels lazy, and if you didn’t pick up on it earlier, I’m not a fan of lazy. NOPE. I’d much rather be stubborn instead. *facepalm*