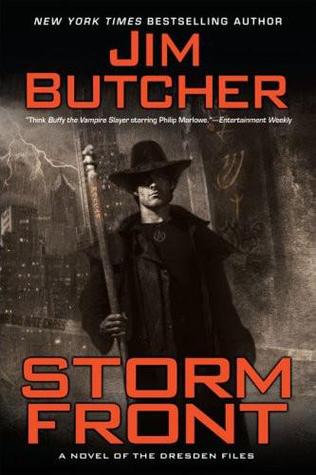 HARRY DRESDEN — WIZARD Lost Items Found. Paranormal Investigations. Consulting. Advice. Reasonable Rates. No Love Potions, Endless Purses, or Other Entertainment. Harry Dresden is the best at what he does. Well, technically, he's the only at what he does. So when the Chicago P.D. has a case that transcends mortal creativity or capability, they come to him for answers. For the "everyday" world is actually full of strange and magical things—and most don't play well with humans. That's where Harry comes in. Takes a wizard to catch a—well, whatever. There's just one problem. Business, to put it mildly, stinks. So when the police bring him in to consult on a grisly double murder committed with black magic, Harry's seeing dollar signs. But where there's black magic, there's a black mage behind it. And now that mage knows Harry's name. And that's when things start to get interesting.

In my defense, I haven’t had much luck with male authors in the genre, and come on . . . we’re up to what? FIFTEEN installments, with the SIXTEENTH already in the works, so yeah—DAUNTING. Cut me some slack.  And besides, better late than never, right?

Also, I’m holding all of you partially to blame, b/c someone should have told me that around book 3 or 4 the series becomes seriously FAE oriented. So what’s up with that, huh? I’ve said more than once that Fae are my FAEvorite, and based on the PUNS in Storm Front alone, I’m the one who should be feeling betrayed, not you.

Okay. I have adequately blame-shifted, so moving on.

I knew going into this that I’d be entering a longterm relationship with Harry Dresden. I was willing, but skeptical. Even with the image of Paul Blackthorne firmly planted in my subconscious, I knew from experience that commitment requires more than a pretty face.

Little did I know how right I was.

You see . . . longterm relationships are WORK. And often, the things you love the most about another person are the same things that enable that person to drive you NUTS.

I love how realistically flawed Harry is.

I hate how realistically flawed Harry is.

He gets himself into a tight spot, so he rationalizes:

“It wasn’t as though I was actually going to be doing any black magic, I told myself. I was just going to be figuring out how it was done. There was a difference. I was helping the police in an investigation, nothing more.”

But then he immediately calls his own bluff:

“Yeah, right. And maybe one of these days I’d go to an art museum and become well rounded.”

He’s also incredibly self-aware. He knows his weaknesses as well as his strengths, and he presents both sides very matter-of-factly. It was refreshing. There was no false modesty or self-deprecation. No melancholy search for affirmation. Harry Dresden just lays it all out in plain site, do with it what you will.

But that same openness allows you to see (over and over again) how hapless he is when it comes to the fairer sex . . .

But then he gleefully reveals his boyish, mischievous side by the sheer delight he takes at pulling one over on someone who has underestimated him. *rolls eyes again, but this time while grinning*

The plot was . . . eh . . . *shrugs* I’m giving it a pass this time, b/c I’m pretty sure a lot of groundwork was laid for future installments, and while this was a fairly entertaining read, it was also fairly predictable, and Bad Guy was just a stock power hungry Bad Guy.

On the world-building front, we were given a lot of hints, but nothing substantial, but that was okay, b/c so far, we’ve only been in the real world, so as much as I’d like to know more about the Nevernever (RIGHT NOW), there’s plenty of time for that when we get there.

Overall, I definitely see this series being worth it (and not just b/c if I read this one, I will have read every, single one of the Big Deal UF series . . . which may or may not be a personal goal . . . *shrugs noncommittally*). Harry Dresden is a realistically likable character who I have a suspicion will turn out to be quite formidable, and Butcher lays a promising foundation with this first installment. Will it live up to my expectations? Only one way to find out . . .