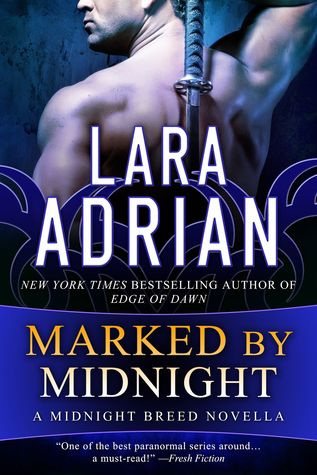 Determined to solve a string of brutal slayings in London, vampire warrior Mathias Rowan is forced to seek the help of Nova, a fiery tattoo artist who ignites an unexpected, yet undeniable, passion in the grim Order enforcer.

Nova’s shadowy connections and dark talents may be Mathias’s best hope of unmasking a treacherous enemy . . . but falling for a woman with her dangerous past will risk both their hearts and their lives.

When I started reading paranormal books again, after veering away from them for years, the series that was recommended to me to read was Black Dagger Brotherhood. And then I found the Midnight Breed books for myself. To me, while I still love the BDB books, the Midnight Breed books are superior to them. So when I found this novella a couple of days ago, I was super excited to read it. The story didn’t disappoint, but something else did.

Mathias is the head of the Order in London. The Order is a group of highly trained vampire warriors. They police other vampires(known as Breed) and generally keep the peace among the Breed. Someone is killing humans with a tattoo of a scarab on their hands, and then dumping them into the river. When Mathias gets involved in the case, he investigates a tattoo parlor where a young woman named Nova works. Even though she denies knowing anything about the deaths, Mathias knows better due to his psychic ability to feel when violence has taken place somewhere. It’s not long before he realizes that Nova has more then one secret.

Since this is a novella that takes place after eleven previous books, the reader that hasn’t read the previous books might be a bit lost as far as the world building, however, Adrian does explain enough so this could be a stand alone. This series is rich in world building and actually is one of the reasons that makes it better to me, then BDB. My stance is, if this is the only Midnight Breed book(novella)you read, then by all means read it. True, it is but a sample of the Midnight Breed world, but it does give the reader a feel for what they will get if you read this series. What you get with this series is a urban fantasy/paranormal romance that is always a wonderful romance, along with hot vampire warriors, their breedmates, and plenty of action.

There was one thing that bothered me about this novella. It is billed at 100 pages but it actually ends at 83 percent in. The rest of the book is advertising other books by Lara Adrian. So while I was wishing for at least 100 pages of one of my favorite series, what I got was a much shorter story. That was a disappointment for me. So keep in mind, this is just a novella, but I would recommend not only reading this short story, but starting at the beginning with Kiss of Midnight. If you like UF or Paranormal romance, and haven’t read this series yet, I don’t think you will be disappointed in the least.

12 responses to “Review: Marked by Midnight by Lara Adrian”