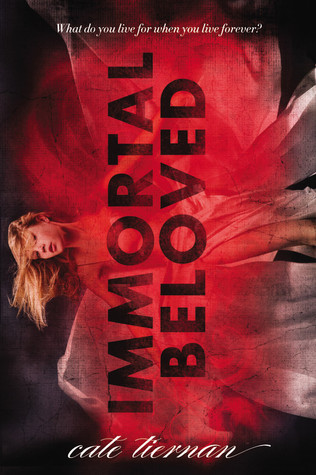 Nastasya has spent the last century living as a spoiled, drugged-out party girl. She feels nothing and cares for no one. But when she witnesses her best friend, a Dark Immortal, torture a human, she realizes something's got to change. She seeks refuge at a rehab for wayward immortals, where she meets the gorgeous, undeniably sexy Reyn, who seems inexplicably linked to her past.Nastasya finally begins to deal with life, and even feels safe--until the night she learns that someone wants her dead.Cate Tiernan, author of the popular Sweep series, returns with an engaging story of a timeless struggle and inescapable romance, the first book in a stunning new fantasy trilogy.

Have you ever discovered a new book, by a new author, and absolutely LOVED it, so you go out and immediately buy the next book the author writes, and it’s not quite as good as the first one, but it’s still pretty good, so the next time a new book is released by that same author, again, you go out and buy it immediately, only this time it’s not very good at all, and you start to think maybe the author is a one hit wonder?<——that’s a REALLY long, yet (mostly?) grammatically correct, sentence.

That’s also really NOT what happened here. In fact, it was pretty much the reverse.

I discovered Tiernan’s Sweep series probably 10 years and inhaled it (all 15 installments) . It was okay, but the most I can say about it is that it was entertaining. Then I found her Balefire series, which was thankfully much shorter (only 4 installments) and it blew Sweep out the water.

So when I stumbled across Immortal Beloved, I was like, “Ooohhh . . . that looks interesting.”

And it was fantastic.

Nastasya, Nasty to her friends, is an immortal. No one is sure where the first immortal came from, but they can be found among every race and nationality. As is usually the case, they are not truly immortal—if you cut off their heads, burn their bodies, and scatter their ashes, they will not survive, but that’s a rather specific set of circumstances, so I don’t begrudge them their “immortal” status.

They also have the ability to learn and use magic.

If you know anything about Tiernan, then this is not a surprise. Tiernan excels at writing all things witchy, and Immortal Beloved is no exception. But Nasty avoids her magic, b/c she learned at a very young age how dangerous it was for her to let others learn of her abilities.

Why is it dangerous . . . ? I think you know where I’m going with this—READ THE BOOK *winks*

This book . . . is a very emotional story to read. Nasty has money and beauty and immortality and a collection of friends who have all of those things as well, and . . . they’re pretty damn awful to tell the truth. Nasty leaves without a word after Incy, her best friend, uses magic to break the back of a rude cabbie . . . b/c he can. B/c he was angry that the cabbie dared to call them out for their juvenile behavior. So he . . . broke the poor man’s back . . . left him in a puddle on the street beside his cab . . . used magic again to prevent the man from calling out for help . . . and then went clubbing.

YEP. Incy’s kind of a bastard.

And while Nasty is shocked and horrified by Incy’s behavior—she had no idea he could use magic that way—she allows herself to be steered towards the bar that the rest of her crew are headed for, starts drinking, and does not one thing to help the man.

The next day, she wakes up hungover and completely disgusted with herself, and decides that something has to change. She has no idea how she became the person she currently is, but she’s terrified of what it might mean for the rest of her very long life.

So she runs to the states.

She’d met a women about 80 years ago, you see, who told her simply to come if she decided she wanted more out of life.

From there she enters a kind of rehab for immortals. It’s hard and it hurts, but Nastasya has reached a place where no matter how bad it is with River and the other immortals at the retreat, she can’t stand the thought of being anywhere else either . . . so she stays.

This book would be an excellent story even without the paranormal elements. Nasty doesn’t need to be an immortal or capable of magic for her story to draw you in, make you feel her agony and despair and determination to change, be better, be MORE. But she is . . . and that only makes things more interesting . . .

And then there’s Reyn . . . the Viking GOD. Well, okay fine, he’s not really a god, but he’s several inches over six feet of blond Viking warrior, and that’s good enough for me.

And they HATE each other. It’s fantastic. Nastasya and Reyn achieve the kind of slow burn combustibility that’s only possible when legitimate dislike is present, and it’s HOT.

So the characters are awesome. And despite what I said earlier about no one really knowing where immortals came from, the world-building in this series is VERY cool. It’s a mix of mythology and paganism, and I loved it. AND b/c even the youngest characters are as old or older than your grandparents, and no part of this story takes place on a high school campus, this is one of those YA novels that even readers 10+ years out of high school can enjoy. Immortal Beloved is an excellent first installment to this excellent trilogy. I recommend it to anyone who likes witchy UF and hot Viking gods.

Was this review helpful to you? If so, please consider voting for it on Amazon