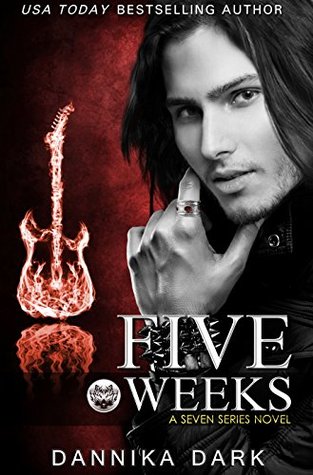 Izzy has always loved the freedom and adventure of life on the road, but she's recently decided to settle down--as much as a rogue wolf can. When her boyfriend gets her a job working at a hot Shifter bar, she runs into the last person on earth she expected to see again.

Jericho isn't the famous rock star he once was, though he still plays in a local band and loves to party. Beautiful women come and go, but music is his only passion--until a sassy redhead named Isabelle Monroe shows up unexpectedly.

Fate reunites two former friends living with one foot in the present and the other in the past. But will they have a future when one of them is forced to choose between life and death? Old habits die hard, and sometimes the toughest addictions to shake are the ones that control our hearts.

In this third installment of Dannika Dark’s Seven Years series, we get Jericho’s story. Jericho is a singer in a rock band and is a wolf shifter. I was on the fence about him previous to this book, as he wasn’t my favorite from the pack of brothers. This was unusual for me, because my guilty pleasure is rock star books. After reading this, I have changed my mind in every way about Jericho. Since this is by Dannika Dark, I should have known I would.

Izzy is pretty much alone in the world when she hooks up with another shifter named Hawk and moves in with him. As a wolf that was born as the only wolf to a wolf father, and cat mother, she has been on her own for a long time. No way was she going to be bullied the rest of her life by her cat siblings. She takes a job as a waitress at a shifter bar. She is shocked to discover that Jericho’s band is playing at the same bar. Twenty years before(yes, these shifters live a really long time, and age really slow), Jericho was the man she loved, but was only her best friend. They traveled together while he toured for five years, but all she could do was watch as he had a different woman every night. Jericho is equally shocked, as Izzy was the only woman he ever loved. Of course neither knows how the other one feels.

If I thought the previous books in this series were full of action, this one beats all of them. I don’t want to tell spoilers, so I will just say that this book is full of bad guy shifters and humans, drug dealers, kidnapping, attempted murders, justified killings, and the list goes on. At it’s heart though, is the romance between Izzy and Jericho. It was a really hot, but sweet romance. Since Izzy isn’t single, things are never boring during this book to say the least. It doesn’t help that the pack has problems with Izzy, and that is something that I didn’t like, but was realistic in this instance.

I loved the characters of Izzy and Jericho. Izzy is a beautiful, fun, people person, who actually enjoys her job. Jericho is the epitome of a rocker, a good looking man, one that lives for his music and of course his pack. We also get to see all the characters from the previous books and that is always one of the best parts of a series for me.

I have always enjoyed this authors world building. As with any paranormal series, she has her own view of what is involved in the Breed world, or as in this case, the shifter world. This series and her Mageri Series, take place in the same Breed world, although not in the same part of the country. I will leave the world specifics for the reader to find out, as I don’t want to tell the whole story!

There’s never a cliffhanger with any of this author’s work, and I have learned to really appreciate that in a series. As I have read everything by this author, I can’t stress enough how good a storyteller she is.

So we have lots of action, a great romance, memorable characters, good world building, and I totally loved it, and as with anything by this author, I couldn’t stop reading. I will be really interested to see which brother from the pack will be featured next. Or even if the next one is about another of the characters featured-totally possible as I know lots of readers are interested in other side characters, as I am too.

I honestly can’t recommend this series or the author’s Mageri series enough. Read either one, and I know you will enjoy.