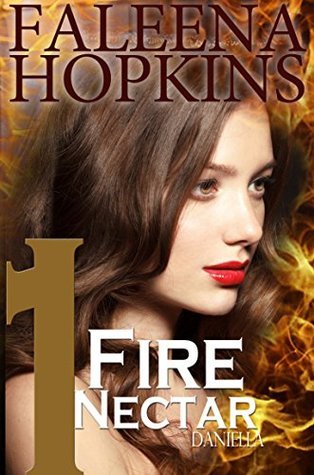 Daniella Harcourt uses being a high-end photographer as a cover to keep her late hours, isolated lifestyle, and outward illusion, intact. Her human friends don't know what she is--- a two hundred year old vampire who hasn't seen her maker or any other vampire in almost fifty years. But her veneer is slipping. She's coming apart at the seams. Eternity is too long to keep a secret, to pretend to be something other than what you are... even if you are by nature a loner. Dani is on the verge of doing something drastic... something that will change her life, forever. But maybe that's exactly what she needs. What would you do... with eternity?

FIRE NECTAR is a gripping series where the vampires tell their stories, confide in us who they are, as we bound seamlessly between past and present day.

People that enjoyed Anne Rice’s, Interview with a Vampire, may really like this story. I am not saying that it was the same story or anything, just that it put me in mind of that book in certain ways. I had a feeling it was going to be unusual as far as vampire books go, and I was right.

Dani is over 200 years old now and in the grip of a numbing depression. She has friends, a profession, and her own private sanctuary that she built with her own hands. Being a vampire, she has to know that the place she sleeps during the day is as safe as she can make it. She is alone in this human world, and even with friends, has no one that she truly trusts with her secrets. One night while out with her closest friends, she sees HIM. He’s a human bartender named Adrian, and she can’t take her eyes off of him. And the feeling is mutual. All of a sudden, she can feel again.

The story jumps back and forth in time, back to 1812 and the events surrounding her change to vampire. We get bits and pieces of the past, just enough to be interested and then it jumps back to the present for the main story. We learn about her maker, Elizabeth, and the reasons Dani chose to change. At the end of the book, the author has included a glossary of sorts, mainly concerning things about 1812 that she included in the book. I ended up reading most of this too. If you like history, you may enjoy this, as I did.

Apparently, Elizabeth was her lover back in the early days, but it’s been almost fifty years since they have even seen each other. Immortality can cause problems in a relationship and all that, seems to be the reason. If you think immortality sounds good, this book may have you thinking again. Of course, Elizabeth picks now to come back in the picture, but only as a friend. Or maybe not?

The writer has written authentic characters, in particular, that of Dani. She is so controlled and enigmatic, almost mesmerizing, and drew people to her, much like what you would think a real vampire would. Adrian was deeply flawed, but someone I wanted to root for throughout the main part of the book. I am still on the fence about Catherine, except when it comes to caring for Dani. Dani’s assistant, Julian, was a very sympathetic human character and I really liked him and at the same time felt for him due to his unrequited love for Dani.

The book was pretty realistic when it comes to vampire sexual problems. Of course, most of the popular vampire books would have you believe that sex=no problems for vampires. Not so here, and I thought that was pretty refreshing for a change. I will let the reader find out what the problem is on their own, but I did feel it was interesting enough to be mentioned here.

I found this book a bit slow in the beginning during the initial set up, but once it got going, it had me flipping pages really quickly-always a sign of a well written book for me. One thing I should mention, when it ended, I was still trying to turn pages, so yes it’s a bit of a cliffhanger. However, there is already a set up for the next book and it is available. Book three is supposed to come out sometime this month(August 2014). It should be noted that I think this is more of a paranormal story, as opposed to a paranormal romance.