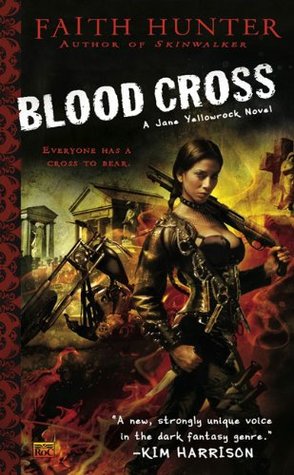 Jane Yellowrock is back on the prowl against the children of the night... The vampire council has hired skinwalker Jane Yellowrock to hunt and kill one of their own who has broken sacred ancient rules — but Jane quickly realizes that in a community that is thousands of years old, loyalties run deep...With the help of her witch best friend and local vigilantes, Jane finds herself caught between bitter rivalries — and closer than ever to the secret origin of the entire vampire race. But in a city of old grudges and dark magic, Jane will have to fight to protect both sides, even if no one will protect her.

And by “villagers” I mean “vampires.” FYI.

Molly is visiting Jane with Angie-baby and Little Evan while Big Evan is doing whoknowswhat in Brazil. Leo is deep in the dolore (<——when vamps fluctuate at varying levels of crazy b/c SAD), and sees Jane’s inability to call for help as an opportune time to seek revenge for thatwhichisnotherfault, and shows up with some of his top scions to literally burn Jane out of New Orleans.

With torches and gasoline and shit.

But before things can get too heated (HA!), Angie strolls out on the upper balcony and starts asking questions/saying things like, “I like fire. Can I come play?” “What’s your name?” and “Mama says you eat people.”

*snickers* LAWD, I love that kid.

Fortunately, Leo isn’t so far gone that he wants to kill Jane badly enough to go through children to get to her. He warns her that, “This isn’t over,” exits, stage left, and leaves his scions raising their eyebrows, b/c he nearly had them burn a couple of kids alive, and as Master of the City, it’s his responsibility to be in the know about these kinds of things.

The next day George (aka Bruiser) shows up with a letter from Leo (handwritten on vellum, and sealed with wax and blood, b/c YEP, dolore = drama queen) ordering her to leave the city immediately after completing her contract with the vamp council, or else.

The contract is to find and eliminate the rogue vamp maker we were made aware of in Skinwalker, and it doesn’t take long for Jane to figure out that the rampaging baby vamps and a long-running string of disappearing witch children are connected.

Do you see where this is going?

YEP . . . not long after that both Bliss (one of Katie’s Ladies in denial about her witchy heritage) and Angie and Little Evan are kidnapped.<——so, so bad.

Molly is nearly killed in the attack, but Bethany (creepy, hella old out clan vamp) heals her, and when Jane shuts down emotionally, b/c 1. she’s bad with FEELS, and 2. she’s blaming herself for not making Molly leave when she found out about the missing witch children, BEAST takes over . . . yes, you read that correctly—Beast takes over, comforts Molly, and promises pain and death for “thief of kits.”

Beast is kind of badass.

In Skinwalker we learned that Jane spent an indeterminate number of years in cat form before wandering out of the woods in Jane form and being placed in a Children’s Home. Jane had no memory of being in cat form, and doesn’t shift again until she’s 18 and stumbles upon the ability. After that she’s aware of Beast’s presence, and sometimes Beast fights Jane for supremacy, but unless Janes’s in cat form, the most Beast can do is make her uncomfortable or seek petty revenge the next time Jane shifts.

In Blood Cross, Beast takes over Jane several times, and whether she’s able to do this as a result of Jane being off balance and emotionally distraught, or b/c she has more control than we originally thought, but exercises restraint, we don’t know . . . but it’s unnerving. It also provides valuable insight into what makes Beast tick.

And Beast isn’t the only character to benefit from this kind of development. We also learn oh-so-many interesting things about George, Rick, Angie, and about vampire history in general (if you’re the kind of person who views extremely altered versions of biblical events as origin stories for supernatural creatures as heretical, I’d skip this one). ALSO—there may or may not be some seriously HOT developments with one (or MORE) of the above mentioned men . . . it’s a possibility . . . *taunts* *blows nose at you* *maybe even throws a cow . . . *

All in all, a most satisfying second installment to the Jane Yellowrock series. Next up—Mercy Blade!

Was this review helpful? If so, please consider voting for it on Amazon or liking it on Goodreads!