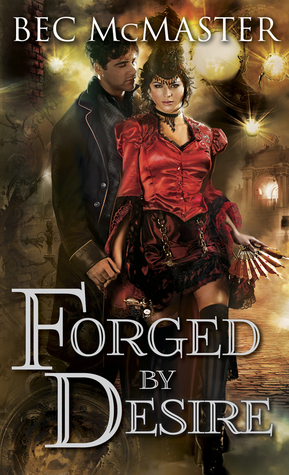 A FEAR SHE CAN'T ESCAPE
Ten years ago, Perry fled her thrall contract to find sanctuary among the Nighthawks. In that time, she's become a respected woman of the Guard, and she's wanted Garrett Reed for as long as she can remember. But when a new case takes a chillingly familiar turn, Perry finds herself once again in the path of a madman...only this time, there's nowhere left to run.

A DESIRE THAT CAN'T BE TEMPERED
Out of their depth and racing against time, Perry and Garrett must learn to trust the desire sparking between them...or risk losing themselves forever to the darkness stalking London's streets.

I love this series for its Steampunk elements, swoon worthy romances, and Bec McMaster’s beautiful writing style. I know that tears are forthcoming every time I pick-up a new installment because this author has a real knack for making me feel invested in the characters, and for tugging at my heartstrings. FORGED BY DESIRE was an enjoyable read, albeit not my favourite LONDON STEAMPUNK novel because of its rather uneventful first half; the story felt like it was divided into two parts instead of being one cohesive story.

Up to this point, readers haven’t gotten to spend much time with Garrett and Perry, so a large portion of this installment was dedicated to developing their characters, and on growing their relationship. Now, that’s pretty standard procedure in Paranormal Romance, but in this instance it didn’t really work for me; the unrequited love grew tiring after a while as did all of the secrets. I probably wouldn’t have butted heads with these elements nearly as much as I did had they been woven into the main story arc instead of having had to trudge through chapters and chapters of angst in order to get to the point. Once the main plot kicked in, I quickly remembered why I adore this series, but unfortunately it just took a heck of a long time to get there.

I liked the political intrigue that the Echelon brought to this tale with dukes, and even the prince consort himself involved, things were sure to get interesting. The murder mystery starts out small, but as things progressed it became apparent that there were larger schemes in play, and that things weren’t quite what they seemed. By the end of this book, I felt like this series’ main story arc was on the verge of being resolved. I have no idea how many installments are planned or whether the author is going to simply take LONDON STEAMPUNK in a new direction, but regardless I can tell you this—OF SILK AND STEAM will be a must read! March 2015, mark your calendars.

Perry’s character was a bit problematic for me; I didn’t exactly dislike her per say, she just wasn’t overly memorable either. Her Nighthawks persona didn’t jive with her past, and I had difficulty making the switch from heroine to victim. Garrett on the other hand was absolutely brilliant! I loved when his Blue blood half reared its primal head, and Reed’s borderline obsession to Miss Lowell was charming—tracking beacon and all! I enjoyed the slow burn romance, although I wish that they would have A) gotten it on sooner or B) been better incorporated into the plot line. Lynch & Rosalind, the characters from book 3, played pretty significant roles in this novel, and the rest of the LONDON STEAMPUNK cast also make brief cameos. The whole gang together at last!

Bec McMaster delivered another Steampunk-erific installment with FORGED BY DESIRE!

56 responses to “Review: Forged by Desire by Bec McMaster”