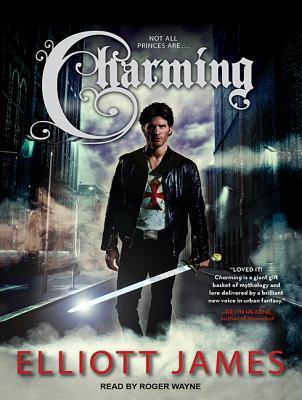 He comes from a line of Charmings -- an illustrious family of dragon slayers, witch-finders and killers dating back to before the fall of Rome. Trained by a modern day version of the Knights Templar, monster hunters who have updated their methods from chain mail and crossbows to Kevlar and shotguns, John Charming was one of the best--until a curse made him one of the abominations the Knights were sworn to hunt.

That was a lifetime ago. Now, John tends bar under an assumed name in rural Virginia and leads a peaceful, quiet life. That is, until a vampire and a blonde walked into his bar...

CHARMING is the first novel in a new urban fantasy series which gives a new twist to the Prince Charming tale.


I loved Elliott James’ PAX ARCANA universe, his first person POV writing style, and John, the male protagonist, but I had some major issues with the love triangle, info dumps, and the fact that the female lead was a Valkyrie. However, the former appears to have been resolved, and even though I have reached my limit on books that feature this type of lore, the Norse mythology was light enough to be tolerable. And, because of this, I will not hesitate to one-click DARING in September. CHARMING was made for audio, as soon as I heard Roger Wayne’s voice I knew that this series was meant for my ears and not my eyes.

A number of reviewers mentioned that having the narrator speak directly to the reader was a little weird; I on the other hand did not have this problem thanks to the audiobook. From the prelude onward I felt like I was part of the story, and I really enjoyed that aspect of James’ style. The world-building was rich albeit a little too much at times, and I especially liked the idea behind the PAX ARCANA. Many authors struggle with whether supes are ‘out’ or not, so I loved the idea behind a world-wide spell. The Knights Templar oath also added an interesting twist on what John can and cannot do, plus he’s learned how to brew the perfect cup of coffee—a man after my own heart!

I’m not sure why the love triangle surprised me, but I honestly just didn’t expect one from a male Urban Fantasy author which is probably why it annoyed me way more than it should have. Dvornik and Charming are two bad ass characters, so the fact that they are fighting over Sig like a couple of school boys struck me as ridiculous. And, at times I found that the vampire hunt became secondary to the romantic drama which caused me to lose interest in the story. But, the wonderful secondary characters helped to reel me back in, and John’s wit & snark reminded me of Atticus O’Sullivan (Kevin Hearne), another protagonist whom I adore.

Roger Wayne was an instant hit with this listener; I loved everything about his delivery and tone, and how I felt like he was talking to ME because of the first person POV. His narration flowed well, and I liked all of his character voices. I sometimes had difficulty telling when an explanation wasn’t part of John’s storytelling, but otherwise this audiobook was a near perfect listen. I finally have another male narrator to add to my favourites list—I’m now at two in case you’re wondering.

CHARMING brought a lot to the table with great writing, lovable characters, and the geeky humour that I love. It wasn’t perfect, but Elliott James hasn’t really even gotten to the best part yet… the werewolves!