The lovely Tricia Skinner is knee deep in edits at the moment working on the next installment in her ANGEL ASSASSINS series that’s due out later this fall from Entangled Publishing. So, she opted to share an action-y excerpt from her latest book, ANGEL KIN, instead. Enjoy!

Angel Kin Excerpt from Chapter 10
Abel stared into the cold, unreadable eyes. Rahab shoved him away and clasped his hands behind his back.
“Select two weapons.” The angel’s eyes narrowed with his dangerous invitation. “Prove that my brethren have not miscalculated in keeping you alive.”
Bloody fucking hell. A challenge. Abel stomped to the rack and grabbed the closest swords. He extended his arms, testing each weapon’s balance. Rahab’s angelic gifts were unknown to him, but he brushed the fact aside and tossed a sword to his opponent. As soon as the Renegade touched the hilt, the blade burst into flame.
Well, shit.
Abel swung his sword on an arc. The blade’s descent should catch the angel’s left arm, but Rahab dematerialized in an implosion of smoke and light and Abel struck empty air.
Double shit.
A pop was the only warning he received a split second before the Renegade’s blade thrust forward. The damned fallen asshole had rematerialized behind him. Abel spun, deflecting the blow, but a lick of flame singed the skin near his kidney.
Dravyn cackled off to the side, obviously enjoying the show. Bastard. Abel locked that away in his mental torture file. One day soon, the dark elf would die swallowing his tongue.

I’m Tricia Skinner and I write Urban Fantasy with Romantic Elements. I’m a former journalist who discovered my inspiration to write fiction as an escape from “real life.” My reading tastes are all over the place, but I’m mainly drawn to fantasy (and its subgenres), paranormal, sci-fi, and history.


When I’m not writing, I’m a newbie “green” practitioner, fitness procrastinator, and a technology geek. I’m a mother and a wife. My family includes two Great Danes. I’m also a gamer. I enjoy interacting with my fellow geeks and helping other writers, especially through the Fantasy, Futuristic & Paranormal Chapter of Romance Writers of America where I’ve served as Newsletter Editor. 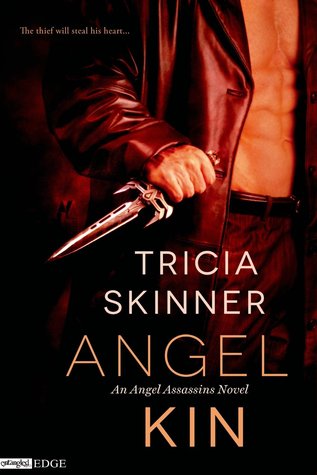 While channeling Robin Hood’s “steal from the rich and give to the poor” attitude at a local politician’s house, ex-con Katie Logan witnesses a forced suicide. Dirty or not, supernatural or not, he didn’t deserve to die, especially not by his own hand. But with her record, stepping forward as a witness isn’t an option. On the run from the police and the murderer, she turns to The Bound Ones for help.

When a beautiful woman comes to The Bound Ones, half-angel assassin Cain is immediately drawn to her. But when she fingers him as the killer, he can come to only one conclusion. The twin he thought was dead is very much alive…and trying to send him a message. Unfortunately, that message is: “You’re next.”

It’s a race against time as Cain fights to save the woman he’s falling in love with before his brother Abel destroys them both.


Visit The Book Nympho to read today’s ROMP post by AC Arthur, then VOTE for your fav!