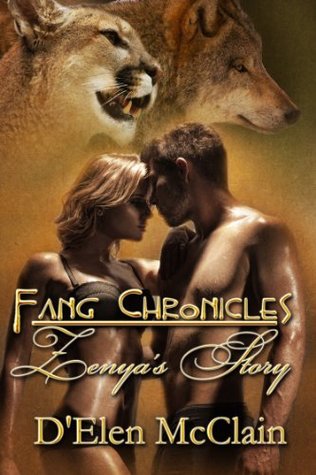 With a beastkind war on the horizon, and his entire pack wiped out by the southern lion pride, Nicolas longs for death after months of daily torture at the hands of his enemies.Zenya, a werecat, rescued by wolves, places herself in danger’s way because Nicolas’s dark eyes haunt her dreams. They’re natural enemies but their beasts have other ideas.Add in a one-armed teenage hellion, a blind female with a heart of gold, and a deadly vampire with a boyish face, and Nicolas just might have a new clan. Misfit cats, crazy wolves, and a special miracle combine with danger, love, and revenge in Zenya’s Story.

I am really loving this series more and more as I go, and actually wishing for the time to read the next book ASAP. Hopefully that will happen soon now that the war in this book is escalating. The war I am referring to is between the wolf shifters and the cat shifters and we aren’t talking about house cats.

Zenya is a mountain lion shifter that was introduced in the previous two books. Up until recently,she was the nanny employed by the vampire head of the Southwestern clan of wolves, Marcus and his wife, Amy. Now she has gone to South America to try and save Nicholas. Nicholas was the wolf leader of the Northeastern wolf clan. His clan was wiped out by the cats in the last book and he was kidnapped by the cats from hell-or they might as well be. In order to save Nicholas, she has to go through that hell. Why? Because her cat has sat up and taken notice of Nicolas’s wolf, after only one brief meeting.

This book was the total adventure from pretty much start to finish. When it wasn’t being an trek through a jungle or a violent fight with cats, it was a really good romance. Along with that comes lots of intense lust. The world building just keeps on giving in this book. In this world, each clan of shifters lives with a vampire. The vampire feeds from each member of the clan and in doing so, keeps the clan alive and well and actually pretty much immortal. That’s just the tip of the iceberg for what’s involved in this authors world building. Without going into it all, I will say that the animosity between the wolves and the cats has been an ongoing struggle. This installment goes a lot deeper into the cat clan world building. It was fascinating, but more then that, pretty horrifying at times, especially when it came to the males treatment of women.

I thought this book was well written, a super fast read, with good characters, one’s that if you have read the first couple of books, you will want to know more about. Lots of new characters are introduced into the series and it will be fun to see what happens with them as well. I was glad to finally get Zenya’s story as she has always been an intriguing character for me. After Nicholas lost his pack, I couldn’t imagine what he would do with himself. It was pretty heartbreaking. What he does, makes for a really entertaining read, and went places I really wouldn’t have thought would ever happen!