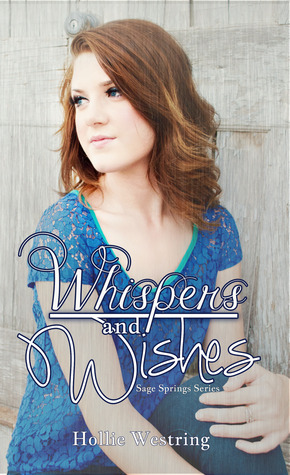 Eliza Monroe has been traveling the United States for three years, immersing herself in the towns she visits as she searches for the mother she’s never known. She hopes returning to her grandmother’s inn in Sage Springs, Mo., will provide the break she needs to evaluate her lonely life.

What Eliza isn’t expecting is to have two men enter the picture, not making her decision to stay or leave any easier. One has been her foundation, while the other is as comfortable as she is hopping from city to city. Throw in a kooky grandmother, a cheerful best friend, a sarcastic guest, a town where residents and spirits interact like neighbors, and Eliza has little time to contemplate her future.

Friendships grow, webs are spun and lies are revealed before Eliza comes to terms with what she wants in life and learns what's really important.

I really loved this book!! It has just enough paranormal in it to make it feel like a paranormal read. It was so beautifully written and it was funny and the words just flowed so well together. I already bought the second book in the series ;)!

The specks of light that twinkled miles and miles above caught my attention as I locked the door. It was a reminder there was more out there. I was only a small piece of this gigantic work of art that was the world. Maybe one day I wouldn’t be so uncertain of my place in it.

Eliza has been on the road the last three years looking for her mother. Her mother left right after she was born, leaving a note to her father that she just wasn’t cut out for the parenting world. Her father raised her himself until he died when she was fifteen(now she’s twenty two). After that she moved in with her grandmother at the Inn she owns in Missouri. She’s been visiting her grandmother since she was little and it’s such a small town that she’s had Lexi as her best friend for a long time. She moves back in with her grandmother after being on the road and not getting any closer to her mother, even with the help of her private investigator she hired. The cool part about Sage Springs is that everyone there lives there (that has family that first founded the place, which is almost everyone cause nobody has wanted to leave) can see spirits! It has something to do with the water that the founders found and drank from, and the ability keeps going in each generation. So all the spirits in town like to be there because they can talk with the people who live there.

Maybe I could pretend it wasn’t a big deal that I had left hours after my best friend’s cousin told me he loved me. The same man who’d known me my entire life and had taken care of me after my dad’s death. The man I’d left in the dust as I ran out of town like the devil himself was after me.

Jake as always been in love with Eliza. He is also Lexi’s cousin. They all grew up together when Eliza visited and after she moved to Sage Springs for good. They tried dating before she left to find her mother and she didn’t want anything too serious because she knew she was going to leave one day. And then there’s the new guy that comes in, Gavin. Eliza’s grandmother needs help around the Inn to get it fixed up in time for Fall Fest when all the tourists come in and Gavin offers to help fix it up. Gavin has a lot of secrets but I still really liked him. Then there’s Ivy. She quickly became one of my favorite characters. She’s in town looking to get to know her real father and the place her mother talked so good about. She has a candle business and some of them she puts spells on when the customers ask for it. She is definitely a kick-ass girl.

Life might throw me for loops, guys might come and go, but I had two solid friends I would always be thankful for. They made me laugh when I was upset. They made me think clearly when I was floating around in a brain that wouldn’t shut off. Lexi provided the shoulder I needed to cry on, and Ivy was the surprise sucker punch I just might need one day.

This book is really about Eliza finding herself and figuring out where she’s meant to be. With the help of all her friends and the spirits that help her too, she finally figures it out. And of course she chooses between Jake and Gavin, and it’s the same one I would’ve made 🙂 I really loved this book. It was a fun, light read with a paranormal twist that left me wanting more!!! Spotlight and Excerpt: Dark Embrace by A

9 responses to “Review: Whispers and Wishes by Hollie Westring”