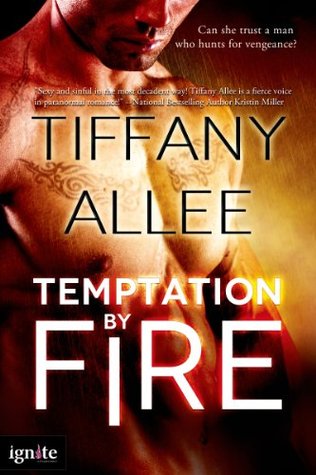 When Ava has a vision of a man's violent death, experience tells her she can't stop it from happening. For once, she's wrong. She saves him, but in doing so enters a world of manipulative demons and the men who hunt them.

Driven by the memory of his murdered family, Karson toils in the violent, thankless fight against demonkind. Masquerading as humans, demons are always a step ahead. But just when he thinks vengeance will be his, Ava shatters his plans and twists his focus.

Her powers have pushed her away from human contact, but this tattooed hunter with a battered heart draws Ava in. Working with the pretty little psychic is a challenge Karson can handle. But keeping his hands off of her is nearly impossible. With demons on their trail and Ava determined to make things right, keeping his heart safe will be just as tough as keeping Ava alive.

I wanted to love this book, I really did. We don’t always get what we want. It really checked all the boxes for me-paranormal romance, likable characters, really bad villains. One of those in the end, wasn’t so true for me.

Ava is a twenty five year old psychic who has spent her life trying to keep from touching people. Touching for her equals visions-not always, but enough that her own family wants nothing to do with her. She has the great best friend, Miriam, which is good since she shuts out most people due to her curse, as she refers to it. She meets Karson, a demon hunter that is in the middle of a huge operation to exorcise the demon inside of a man named Thomas. He’s a couple of days away from his plan coming to fruition, when Ave touches Thomas by mistake. The vision she sees is pretty horrific, not good news for Karson, as it may cause Thomas to figure out what’s happening. It is the catalyst for the two to meet though.

Let’s talk about the likable characters. In the very beginning, I did like Ava, and her best friend Miriam. It pretty much went downhill for me from there. When the main character ignores all the warnings that she is in horrible danger, goes to the one place where the actual danger is(when she really doesn’t have to), AND pretty much acts like an idiot while there, she isn’t going to be my favorite character any more. The phrase “too stupid to live” kept playing over and over in my head throughout the rest of the book, and although she does straighten up her act(character growth and all that), I couldn’t get past it, and believe me, I wanted to! I did like Karson a lot. He is a tortured individual, feels like he is more demon then man due to the demon killing life he leads, and is a total hot alpha male. And apparently, he is extremely forgiving.

The author uses Ava’s actions to move the story along, of course I know this. I just think it could have been done a different way. I didn’t want her to act the way she did-I know everyone makes mistakes and all that, but it just sort of ruined the remainder of the story for me, and it made it a little hard for me to even finish reading it.

The rest of the story was full of romance, demon hunting, and Ava coming into her own as a woman with special abilities-oh yes, having visions isn’t the only thing she can do. If you read this, you may really enjoy it. I know I would have rated it higher if the whole rest of the story hadn’t depended on Ava’s actions early on in the story, because I did enjoy some later parts of the story. The romance and chemistry between Ava and Karson was hot, but also sweet at times, and I did like that. Ava’s and Miriam’s friendship was also a good part of the story.

By the way, I did read some reviews on Amazon(after I wrote this) and the book did get some good ones.

18 responses to “Review: Temptation by Fire by Tiffany Allee”