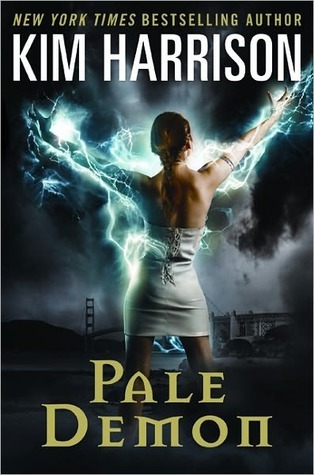 New York Times bestselling author Kim Harrison takes her indomitable heroine on a wild journey of dark magic and supernatural adventure.Pale DemonCondemned and shunned for black magic, Rachel Morgan has three days to get to the annual witches' convention and clear her name, or be trapped in the demonic ever-after...forever after.But a witch, an elf, a living vampire, and a pixy in one car going across the country? Talk about a recipe for certain disaster, even without being the targets for assassination.For after centuries of torment, a fearsome demon walks in the sunlight - freed at last to slay the innocent and devour souls. But his ultimate goal is Rachel Morgan, and in the fight for survival that follows, even embracing her own demonic nature may not be enough to save her.

So I’m pretty sure that I’ve said this several times already, but just in case you missed it—Pale Demon is my FAVORITE book in this series.

Things have been building, and Rachel’s life has been getting more complicated, but by the end of the last book, it looks like she’s finally going to catch a break.

Oliver, the new head of the coven of moral and ethical standards, has verbally agreed to remove Rachel’s shunning at the upcoming Witch Convention, as long as she shows up to said convention and apologizes publicly for her use of black magic.

As much as I needed to do this, I was so-o-o-o not looking forward to it. I mean, I’d been accused of being a black witch–of doing black magic and consorting with demons, both of which I did. Do. Whatever

So yeah . . . life is still complicated, and Rachel (being Rachel) is going to have a hard time apologizing for something that she, 1. is still doing, and 2. is seeing as less and less of a problem. She doesn’t deliberately try to make things as difficult for herself as she can, but she does have a certain knack for it, doesn’t she?

And that’s not all, b/c we soon find out that the coven of moral and ethical standards (CoMaES) is a bit more slippery than anticipated. Rachel actually has to get to the convention for the shunning to be removed, you see, and it’s evident that the CoMaES is going to try to prevent that when Rachel is kept from boarding her flight to CA where the convention is being held.<——NOT nice.

But not entirely unexpected as Ivy and Jenks took the liberty of packing Rachel’s suitcases with old magazines, and repacking her things in different bags, so that when the airport “lost” her luggage, it wouldn’t be a problem.

Did I mention that Trent is trying to catch a ride with Rachel to the West Coast?

TRENT is trying to CATCH A RIDE with RACHEL to the WEST COAST.

That’s like . . . DAYS in a car with Trent. Trent the sexy elf. Trent whom I love to hate. DAYS. With TRENT.

I can tell you that the Withons (Ellasbeth’s parents, and presumably Ellasbeth, herself) are doing everything in their power to prevent Trent from getting to the West Coast, including, but not limited to, sending ASSASSINS.

I’m reluctant to say much about the biggest problem they encounter on the road, b/c it first appears well after the 10% point, which is where my cut-off is for mentioning specifics, but suffice it to say, that there is a BIG problem. A problem so BIG that it’s probably not possible to resolve it entirely in a single installment.

And then there’s the Big Deal. The thing that makes Pale Demon my favorite book in the series. The thing that makes me go back and read an entire passage over and over (and over) again. Yes, the plot is awesome, and yes, there is awesome character development—especially where Al, Rachel, and Trent are concerned—but those things alone are not what push this installment into the 5 star zone.

If you’re even remotely interested in this series . . . if you’ve let yourself fall behind, and tell yourself that you’ll finish the series eventually, if you are either of those things, this is the book that makes it all worthwhile, and you are doing yourself a MAJOR disservice by not catching up and reading it. It’s frickin’ awesome. It’s on the same level as Kate Daniels #3 in its epic amazingness.

Hopefully, you’re convinced, but if you’re not . . . well, you can lead a horse to water, blah blah, and all that. That is all. *runs off to read that entire passage one more time*