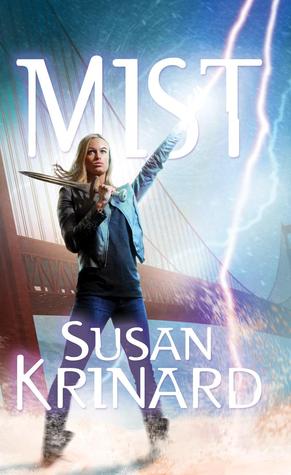 Mist lives a normal life. She has a normal job, a normal boyfriend, and a normal apartment in San Francisco. She never thinks about her past if she can help it.

She survived. That’s the end of it.

But then a snowy winter descends upon San Francisco. In June. And in quick succession, Mist is attacked by a frost giant in a public park and runs into an elf disguised as a homeless person on the streets…and then the man Mist believed was her mortal boyfriend reveals himself to be the trickster god, Loki, alive and well after all these years.

Mist’s normal world is falling apart. But thankfully, Mist isn’t quite so normal herself. She’s a Valkyrie, and she’s going to need all her skill to thwart Loki’s schemes and save modern Earth from the ravages of a battle of the gods.


In MIST, Susan Krinard dives straight into the thick of Norse mythology by assuming that most readers are somewhat knowledgeable about Ragnarök and the lore surrounding it. The lack of back story didn’t bother me overly much thanks in large part to Kevin Hearne’s IRON DRUID CHRONICLES, and Jennifer Estep’s MYTHOS ACADEMY series’ having prepared me beforehand, but if you’re not familiar with the Aesir Gods, you might feel a bit lost in the beginning.

Loki is wreaking havoc in the streets of San Francisco, and stirring up trouble as only a trickster God can. Krinard does a beautiful job of sticking to the roots of this genre by blending fantasy with a classic urban setting, and the result is a nice mix of old and new. The author weaves a fascinating tale of deceit and betrayal that keeps the action flowing, and readers turning the pages. I had no difficulty rolling with the mythology, but the constant influx of terminology and characters was a little much for one novel. The elaborate details made it hard to focus on any one thing which caused the story to feel somewhat disjointed.

Initially, Mist is painted as a fierce heroine, and a brave Valkyrie warrior which is precisely how I like my protagonists. Her character is well-developed, and I enjoyed the strength that she brought to the table considering she’s up against some pretty heavy hitters. However, as the story progresses she’s transformed from a queen into a pawn as fate begins to have its wicked way with her. Mist’s magic is no longer her own, and it quickly becomes evident that she’s just a cog in Freya’s wheel of machinations which drastically changes her role in the overall scheme of things. Her fall from grace was quite abrupt which kind of short circuited whatever connection I had formed with her.

There is an element of romance, but it’s difficult to buy in to thanks to the evil ex-boyfriend and dark elf love interests. Dainn is a complex character, and because of this I think that their relationship would have benefited from a more slow-burn approach. Mist is oblivious to “the game” that the Gods are playing, and I just felt irritated with her for waltzing right into their hands by not only unwittingly sleeping with Loki for months, but also for even considering someone with a name like Dainn Faith-breaker.

MIST delivers a rich story peppered with mythology and action of epic proportions, this book isn’t without its flaws, but series debuts rarely are. BLACK ICE is definitely going on my wishlist.