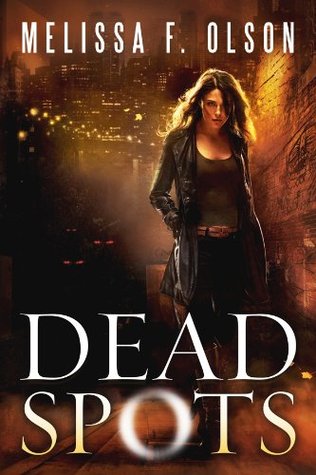 Scarlett Bernard knows about personal space: step within ten feet of her, and any supernatural spells or demonic forces are instantly defused—vampires and werewolves become human again, and witches can’t get out so much as a “hocus pocus.” This special skill makes her a null and very valuable to Los Angeles’s three most powerful magical communities, who utilize her ability to scrub crime scenes clean of all traces of the paranormal to keep humanity, and the LAPD, in the dark.

But one night Scarlett’s late arrival to a grisly murder scene reveals her agenda and ends with LAPD’s Jesse Cruz tracking her down to strike a deal: he’ll keep quiet about the undead underworld if she helps solve the case. Their pact doesn’t sit well with Dash, the city’s chief bloodsucker, who fears his whole vampire empire is at stake. And when clues start to point to Scarlett, it’ll take more than her unique powers to catch the real killer and clear her name.

I follow Amber Lynn Natusch(Author),on Facebook, and when she mentioned how much she loved this book on two different occasions recently, I had to check it out. I was pretty shocked to learn it was the author’s first book, because it sure reads like it’s from a more experienced author.

Scarlett Bernard is what’s known as a Null in the paranormal world. Whenever she comes in contact with a paranormal creature within a certain radius, the creature loses it’s powers and becomes human again. She lives with Molly, a vampire that was turned at age seventeen. Since Molly doesn’t want to spend eternity looking like she is underage, she wants to live around Scarlett so that she can age some of every moment she spends as a human. Of course she also wants to be able to walk in the sun when they leave the house together. Scarlett works for the head of the vampires, the alpha of the werewolves, and the head witch of the area. She cleans up crime scenes done by paranormal elements. I thought this premise was really unique. Understandably,most of the paranormal characters do not want to have anything to do with her or get close to her.

I love urban fantasy, and to me it’s only second to paranormal romance-usually. This book is an instance of really well written urban fantasy, with a component of paranormal romance, by way of an almost love triangle. I know that sounds confusing, but that’s my way of saying that there’s not a real romance, but there’s certainly some crushing going on between two males with this heroine. Jesse is a homicide detective that gets pulled into the paranormal world when he stumbles upon a horrific murder scene that Scarlet has just arrived at. Eli is a bartender werewolf that is a sort of booty call for Scarlett. He doesn’t want to be a werewolf so the reader(and Scarlett) wonders if that’s the real reason he wants to be with Scarlett. When she is assigned by her boss to work with Eli to hunt the murderer, and has to work with Jesse on the same case, things do get interesting and ultimately very dangerous. Most of the time I was team Jesse, but the more I got to know Eli, I decided I wasn’t team anyone. They were both great options for Scarlett-at least I thought so.

This book has some really bad villains. Dashiell, as head of the vampires in Los Angeles, may be her boss, but there’s no love lost there. If anything, she is in as much trouble with him as she is with the murderer. Will,the alpha of the local pack, is pretty much the opposite, and seems like a pretty nice guy. Of course the murderer goes into the bad category, and since this is a mystery, I am not naming names.

This book checked a lot of boxes for me. It was a mystery-thriller, with paranormal characters and the possibility for a romance or two to come in the rest of the series. I loved the premise, the characters, and thought it was a extremely well written mystery. Oh, and I didn’t even mention very much about the witches. I know some readers don’t enjoy the mystery-urban fantasy type reads, but I found this to be a good book and definitely worth the read. I need to find the time to read the next one, which I definitely plan on doing soon! FYI-There are already three books released in this series.