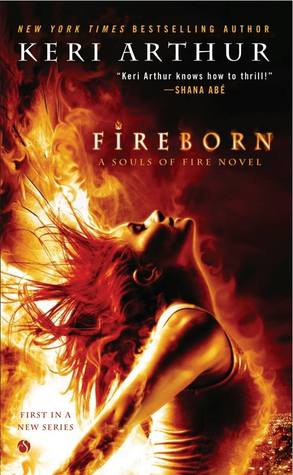 Emberly has spent a good number of her many lives trying to save humans. So when her prophetic dreams reveal the death of Sam, a man she once loved, she does everything in her power to prevent that from happening. But in saving his life, she gets more than she bargained for.

Sam is working undercover for the Paranormal Investigations Team, and those who are trying to murder him are actually humans infected by a plague-like virus, the Crimson Death—a by-product of a failed government experiment that attempted to identify the enzymes that make vampires immortal. Now, all those infected must be eliminated.

But when Emberly’s boss is murdered and his irreplaceable research stolen, she needs to find the guilty party before she goes down in flames…


Werewolves, vampires, shifters, fae, mermaids, witches—you name it, I’ve read about ’em—in fact, I didn’t think that there was a paranormal out there that I hadn’t met, until Keri Arthur’s phoenixes. Now, I’m sure she’s probably not the first writer ever to feature them, but throw in some fascinatingly unique mythology, a different spin on vamps, and three strong fictional crush candidates, and you have one fiery series debut. This seasoned author never disappoints with her trademark writing style, rich world-building, and complex relationships, however I was a little frustrated that the heroine gets kidnapped several times in one novel. I hope that these books won’t be a repeat of Arthur’s DARK ANGELS in that respect. But, that minor annoyance aside, I really enjoyed FIREBORN and can’t wait to get my grabby hands on the next installment!

SOULS OF FIRE and I immediately hit it off; I loved learning about this new universe, and was thrilled with how in depth their lore was explored. Phoenixes have three forms—human, bird, and flame—go through “rebirth” every one hundred years, and have some pretty impressive abilities. Mind you, there are a few major drawbacks to being a fire bird including a nasty witchy curse that’s made true love impossible, they need another phoenix to survive, and living thousands of lifetimes isn’t always all that it’s cracked up to be. But, the world-building doesn’t stop there with additional mythology surrounding fire Fae, vampires, Red Cloaks, and a few mystery supes as well. I was in paranormal heaven!

As far as heroines go, I really liked Emberly; she’s level-headed, quick on her toes, and knows how to throw down. Surprisingly, she still holds out hope that one day she’ll find her soul mate, and I loved that her quasi immortality hasn’t made her bitter despite past failures. Rory is Pearson’s co-phoenix, but because of the curse their relationship is rather complicated; they need each other yet can never click romantically. And, therein lies the problem because any potential suitor must be able to accept that there’s always going to be another man in Emberly’s life. Sam, her ex, left her for that very reason without waiting for an explanation, so I had serious issues with him from the get-go, but on the flip side, I couldn’t exactly fault his logic either. Then add a smexy fire Fae into the mix, and readers are left with a whole lot of man-candy to drool over.

When I first started this book, I wasn’t exactly sure where Arthur was going to go with her phoenixes, but by the end I had a good sense of the main story arc. As in her other series’, the investigative angle is strong, and I enjoyed following this novel’s breadcrumbs. The Sindicati are formidable foes, and I look forward to seeing how the Crimson Death thread plays out as well, not to mention there’s something funky going on with Sam. I already have SO many questions, and this is only the first installment! Earlier I expressed my concerns about this author’s over-utilized kidnapping card, but I was somewhat consoled by the fact that Emberly is extremely difficult to contain. Here’s hoping that she won’t be another helpless victim like Risa Jones.

FIREBORN is book one in a red hot new series that’s destined to become an Urban Fantasy favourite; if you’re tired of the same ol’, then look no further than Keri Arthur’s SOULS OF FIRE.