Happy Saturday! I’d like to welcome the wonderful, Delilah Devlin, to the blog! Her latest paranormal romance book, ONCE IN A BLUE MOON, was just released on July 15th, and she’s celebrating with an excerpt and giveaway. May I present, Ethan!

Excerpt – Meet Ethan
Ethan Thorne leaned his elbows on the rail as the rickety ferry boat made its way across a canal deep in a sleepy bayou. A place nearly out of time. Unchanged except for the slow drone of the boat’s engine. Trees draped in moss. Murky water. The sounds of insects buzzing and chirping and bird calls were an unending cacophony of sound.

They were headed across the expanse where he would build a bridge to the dock on the far side. A dock that wasn’t a dock. It was simply a road that had sunk into the swamp, the tarmac brittle and broken. The little community on the other side was in sore need of a bridge, so why had they protested for so long?

As the boat drew nearer, he noted a couple dozen people gathered on the sunken road. Most were dark-haired with dark complexions and appeared to be related by the similarities of their features. However, one group of five women standing in a half-circle to the side seemed out of place.

For one thing, their features weren’t large-nosed and their skin was pale. And each of the women was stunningly beautiful. How had a small backwoods place like Bonne Nuit produced so many delicately boned, beautiful women? Two were brunette, one was blonde and one red-haired. The one that drew his eye had hair the color of midnight with a slight bluish sheen.

And they dressed differently from the rest. Not a one wore a tee or tank or well-worn jeans and boots. These women wore long skirts, sandals or bare feet, rows and rows of stones around their wrists and long necklaces with pendants resting between their breasts.

At second glance, their skin wasn’t merely pale, it was luminous.

Realization of what they were hit him with the impact of a blow to his solar plexus. Witches. His gaze scanned the far bank. Where were their guardians?

He straightened and purposely dragged his gaze from them. He didn’t need to incite a war with whatever group of demons lurked out of sight.

“You see them?” Renner murmured, coming up beside him and smiling, his expression at odds with the intensity of his unearthly sea-blue gaze. In direct sunlight, his irises reflected the light, glinting like sunlight on a calm blue pond.

“Perhaps they haven’t been claimed.”

“How is that even possible?”

“The isolation? The fact they’re banded together?” Renner raised a brow. “How interesting.” He pulled a pair of sunglasses from his pocket and slid them on. “No need to announce our presence just yet.”

It being daylight, Ethan had no worries his eyes would give him away. “Guess that means I’m staying in the town.”

“Until we find out what’s happening here, yes. Brother, we may have struck the mother lode.”

He flashed a grin and turned toward the bank.

Ethan crossed his arms over his chest, instinctively barring his heart to suppress the urge to pounce the moment the ramp dropped to the tarmac. Witches explained a lot. The string of bad luck that had plagued the company the moment the contract for the construction project had been awarded, although seized engines and workers’ accidents were behind them now. Witches also explained how this project had been placed so far down the list that the state’s budget had nearly excluded this last bridge.

Which might confirm his suspicion these witches were truly alone. If they’d been mated, there’d be no need to continue their isolation. Bound, they were protected. For a troll, a lesser demon on anyone’s hierarchy, the thought of five witches, the most exalted feminine prizes in the demon kingdom, the opportunity was too ripe with possibility to ignore.

Until recently, award-winning romance author Delilah Devlin lived in South Texas at the intersection of two dry creeks, surrounded by sexy cowboys in Wranglers. These days, she’s missing the wide-open skies and starry nights but loving her dark forest in Central Arkansas, with its eccentric characters and isolation—the better to feed her hungry muse!


For Delilah, the greatest sin is driving between the lines, because it’s comfortable and safe. Her personal journey has taken her through one war and many countries, cultures, jobs, and relationships to bring her to the place where she is now—writing sexy adventures that hold more than a kernel of autobiography and often share a common thread of self-discovery and transformation. 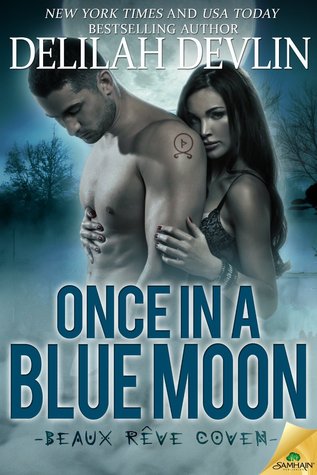 When testing an enemy for weaknesses, prepare for things to get hard.

Bryn Cavanaugh and her coven like that the community they live in is isolated thanks to a storm that destroyed the bridge between them and the outside world. Now the state wants the bridge rebuilt. When the construction crew checks into the inn, Bryn begins to suspect something about the crew’s boss isn’t quite…human.

Bridges are Ethan Thorne’s thing—after all, he’s a troll—so building a simple span over a remote canal in backwater Louisiana shouldn’t be this much of a problem. When he follows the pretty little innkeeper to a midnight rendezvous, he discovers why his crew keeps running in to trouble. Bryn and her coven are casting spells in the moonlight.

As a troll, Ethan feels the sting of his low place in demon hierarchy. But finding an unprotected coven of witches in the middle of the bayou could lead to all sorts of adventure. And it’s better to keep your enemies close…

Warning: Contains a handsome troll (Hey, it can happen!) who’s skilled at building sexual tension with his hands—and several other body parts, as well—and a witch who’s determined to protect her home, but forgets to shield her heart. 15 responses to “Book Blast and Giveaway: Once in a Blue Moon by Delilah Devlin”