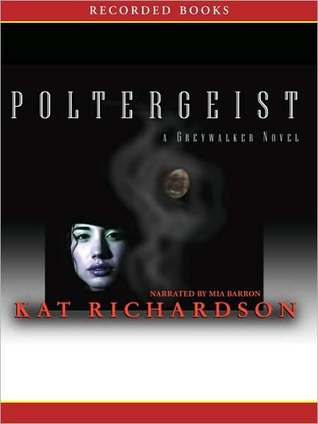 Harper Blaine was your average small-time PI until she died - for two minutes. Now she's a Greywalker - walking the thin line between the living world and the paranormal realm. And she's discovering that her new abilities are landing her all sorts of "strange" cases.

In the days leading up to Halloween, Harper's been hired by a university research group that is attempting to create an artificial poltergeist. The head researcher suspects someone is faking the phenomena, but Harper's investigation reveals something else entirely - they've succeeded. And when one of the group's members is killed in a brutal and inexplicable fashion, Harper must determine whether the killer is the ghost itself, or someone all too human.

I’d like to start this review off by first saying that I’m not 100% sure whether it’s the narration or the story that’s making me consistently rate this series 3 stars, so you might want to take my thoughts with a grain of salt until I figure that one out. Anyway, I think that I enjoyed this installment slightly less than its predecessor on account of all the psycho babble & lengthy experiment explanations. I felt like I was back in college listening to a professor drone on about a subject I couldn’t have cared less about. Kat Richardson’s approach to the paranormal seems to be largely academic in nature, and I’m not convinced that that writing style is well-suited for the Urban Fantasy genre.

One of the aspects that I enjoyed the most about GREYWALKER was Ben and Mara’s supe 101 sessions with Harper, yet they seem to have almost completely vanished in this installment. I’m not sure how much time has elapsed between novels—I may have missed it in the earlier chapters—but it can’t be more than a couple of months, and I found that Blaine’s grasp of her newfound abilities was far too advanced for book 2. She’s also suddenly full-out dating Will, and in a long distance relationship no less, after only a few weeks (?). Again, I’m not clear on the time frame, but it just felt off to me. I had to double-check to make sure that POLTERGEIST was indeed the second installment in this series.

I enjoyed the whodunit murder mystery even though I did find that it was a little too predictable because the suspect pool was restricted to the experiment participants. I also liked learning some of the tricks on the trade when Richardson explores how certain illusions are created; it’s clear that a lot of research went into this novel. Quinton is probably one of my favourite characters to date, and I was satisfied with the role he played in this story as well as Phoebe Mason’s. She’s a new addition, and I look forward to reconnecting with her in future installments. Will on the other hand… I honestly don’t see his appeal, and hope that Harper dumps his ass ASAP.

The narration was somewhat improved when compared to the previous audiobook. I thought that Mia Barron’s Jamaican accent was well-done, and her ‘baby’ voice wasn’t half-bad either, although too much of it would have definitely given me a headache. But to be fair, any 2 year old talking in my ear nonstop would, so that means that her performance was authentic. Barron’s portrayal of the vampire characters was still too over-the-top for my tastes, especially where Carlos was concerned; he came across as more Count Dracula than evil undead master.

In short, my struggles with this series continue, and if something doesn’t start to click soon, I may be calling it quits. POLTERGEIST felt more like a crime novel with paranormal elements mixed in than it did an Urban Fantasy which might be the crux of my problems with Harper Blaine.

Was this review helpful to you? If so, please consider voting for it on Amazon or liking on GoodReads!