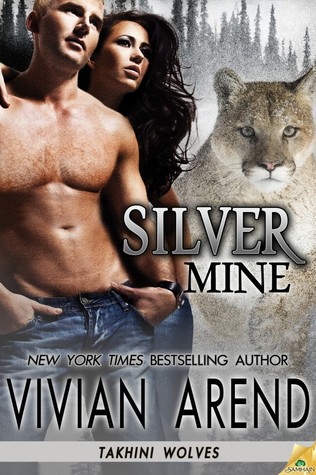 If a tree falls in the forest, duck…

Life in isolation is the safest place for Chase Johnson, a crossbreed who doesn’t know which form he’ll assume next—cougar or wolf. Once a year, his unelected position as spokesman for the Yukon outcasts forces him to visit civilization. This time he runs across someone unexpected. She’s not his mate, but she pushes all the right buttons.

It’s taken years for Shelley Bradley to gather the courage to return to her home pack. In spite of being the lowest of the low—a shifter who can’t shift—she’s determined to make a place for herself as the Whitehorse locals’ new vet-slash-doctor.

There’s definite electricity between her and Chase, but sex with fellow shifters and the inherent mind games got old a long time ago. Ignoring him seems best. When he shows up at her office with a wound that won’t heal, she’s stuck—yet drawn to solve this medical mystery.

As they journey deep into outcast territory in search of answers, their powerful sexual attraction crumbles her resistance. But time is of the essence. If a cure can’t be found before his human and cougar succumb to his injury, he—and others like him—will die.

Warning: Contains a silver-tongued, hairy-chested, lean-muscled Alpha who’s got what it takes to lead in the wilderness and in the bedroom. Yeah, I know…not really much of a deterrent, is it? Throw in continuing territorial wars and a domestic cat. Stir and enjoy the chaos.

I read and reviewed the first book in this series, Black Gold, and I enjoyed it so much that I read the second book almost immediately after finishing it. I decided to wait to review it since I didn’t want to review them back to back. As with the first book, this takes place in the Yukon. This time around, it goes even further into the wilderness.

Shelley is a veterinarian that specializes in shifters, and has moved to the Yukon to start her practice. She’s also a wolf, but she can’t shift. Chase lives way out in the wilderness. He lives in a cabin, and is a sort of alpha for a ragtag group of loners. He is half cougar, half wolf-a very unusual combination and really rare. Since her wolf won’t come out and because he is a cross-breed, they both are kind of outcasts, of a sort. When they meet on one of his yearly visits to town, everything wakes up in them, except the mating thing. Neither thinks they will ever have that-with anyone.

I really enjoyed the characters of Shelley and Chase. Both have had hard personal lives due to their differences, and really needed love in their life. Over and above the two main characters, the author introduced a motley crew of loner characters. Some of them were amusing, some were just heartwarming, and some were just out and out crazy. There’s also a little black cat named Enigma, that manages to have a humorous scene with Chase’s cougar. Cat lovers(like me) will enjoy that scene. I am sure the author had as much fun creating the characters, as the reader has reading about all of them.

The bulk of this story takes place in the middle of nowhere, in The Yukon. The Yukon is sparsely populated and made up of vast areas of beautiful wilderness, as described by the author. I am not usually a fan of wilderness books, but these books are just really fun reads. Throw in two main characters that are full of lust for each other, and it ended up being a genuinely good romance. It’s also a bit of a mystery. Chase has a wound that won’t heal and Shelley has to figure out what’s happening. It’s traced back to someone from the wilderness, so Shelley and Chase go on the hunt, back to his home area.

If you enjoy a good adult shifter romance, I can recommend this to you without reservation. Soon I hope to have time to read the next in the series, entitled, Diamond Dust. It features Caroline, Shelley’s half sister, and she also happens to be human. As she has been in each of the two books so far, I’ll be interested to see how she gets her HEA.

FYI-It’s not necessary to read these books in order to enjoy them, but they do go in order time wise-in other words, the main characters from the last book do show up a bit in this book.

24 responses to “Review: Silver Mine by Vivian Arend”