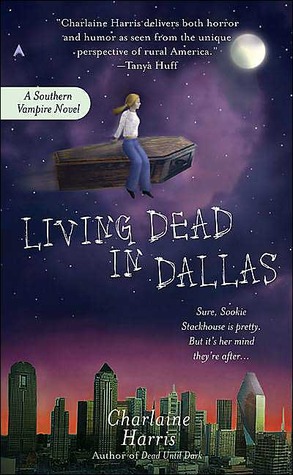 Sookie Stackhouse likes living in Bon Temps, Louisiana, and she likes working as a cocktail waitress at Merlotte's. But she is having a streak of bad luck. First her co-worker is killed, and no one seems to care. Then she comes face-to-face with a beastly creature which gives her a painful and poisonous lashing. Enter the vampires, who graciously suck the poison from her veins (like they didn't enjoy it).

The point is: the vampires saved her life. So when one of her bloodsuckers asks for a favour, she obliges-and soon Sookie's in Dallas, using her telepathic skills to search for a missing vampire. She's supposed to interview certain humans involved, but she makes one condition: the vampires must promise to behave, and let the humans go unharmed. But that's easier than done, and all it takes is one delicious blonde and one small mistake for things to turn deadly...

Most people who have read this series, at the very least, like portions of it.

They like the first 3 or 4 installments, but then they get bored, or after the 3rd or 4th book, the series really started picking up for them.

I’m weird, I guess. I pretty much liked the entire series right up until the end. Sure, how much I liked each book varied—for example, except for the last book, this one is my LEAST favorite, but that’s not uncommon, what with this being book 2 and all. It definitely has its good moments (like when Eric gets shot and that thing happens that is hilarious and awesome), but overall . . . MEH.

Living Dead in Dallas begins with Sookie finding a dead Lafayette in Andy Bellefleur’s car in the parking lot of Merlotte’s one morning. What do you mean, “a dead Lafayette?!” you ask. “Lafayette can’t be DEAD, he’s still going strong in season 6 of True Blood!”

Let me introduce you to a little game I like to play called “Same and NOT the Same.”

SO. Andy’s been drinking, ’cause you know, being a cop is hard, and Sookie has to call Portia (his sister) to come and pick him up.

Leaving his car at the bar.

For persons unknown to leave a dead body in.

But why would someone want to kill Lafayette? He’s so much fun!

So poor Sook’s stressed out about that.

Then when she gets home from work that night, Bill tells her that she’s been “summoned” by Eric.

The next evening they drive to Shreveport, where Eric informs her that she’s been LOANED out to vampires in Dallas who could use some assistance of the telepathic variety. AND while Sookie’s understandably upset about Eric’s high-handedness, there’s really not much she can do about it—she did, after all, agree to help him any time he wanted, in exchange for turning over human culprits to human authorities, rather than taking matters into their vampire hands. I suppose it’s her own fault for not specifying she wouldn’t stand for being loaned out. You live and you learn, I guess.

And that is how Bill and Sookie wind up on an airplane bound for Dallas.

I’ve already said that this is probably my least favorite book in the series until you get to end, and that is b/c . . . while I don’t have a problem with kink, I do have a problem with gross, middle-aged, pervy kink. And this group is just . . . blech.

This book is also where you get your first glimpse of how attentive someone-not-Bill can be.

And that’s really the only sell point for this installment. Well, that, and it’s necessary to read this one to get to the good ones. BOTTOMLINE—too much perv for one book. Read it b/c you can’t move forward without it, but go into it knowing that there is some seriously disturbing stuff going on. That is all.

86 responses to “Review: Living Dead in Dallas by Charlaine Harris”